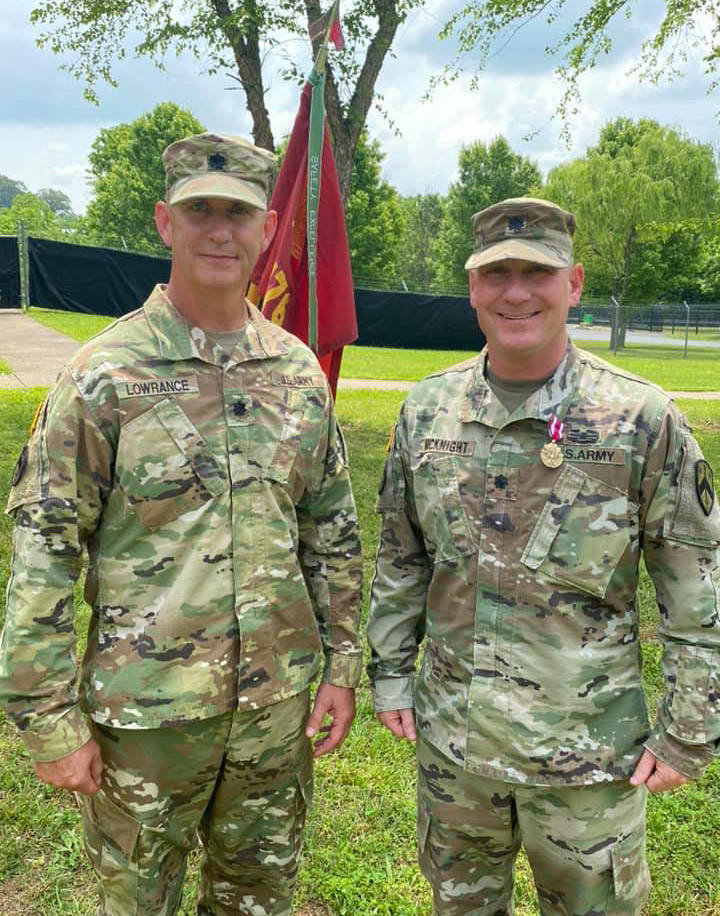 Command of one Tennessee National Guard unit might have changed, but the Marshall County connection remains strong.

On June 6, the 176th Combat Sustainment Support Battalion, based in Johnson City, held a change of command ceremony, from one Lewisburg native to another.

McKnight, son of retired Col. Larry and Diane McKnight of Lewisburg, enlisted in the Tennessee Army National Guard in 1992 and completed Officer Candidate School in 1996.

Commissioned as a field artillery officer, McKnight has served in several command positions and has completed several military courses and schools.

He has deployed overseas for both Operation Enduring Freedom and Operation Iraqi Freedom.

Lowrance is a graduate of Marshall County High School and Middle Tennessee State University, and is the son of the late Ralph Lowrance and Evie Lowrance.

He enlisted in the Army National Guard in 1993, attended Officer Candidate School in 1997, and was commissioned as a lieutenant in the Tennessee Guard’s 278th Armored Cavalry Regiment.

Ironically, this is not the first time Lowrance had followed McKnight in official duties.

Last year, McKnight delivered the Memorial Day remarks in May, and Lowrance served as the keynote speaker in November for Veterans Day observances.

Photo courtesy of the 176th CSSB

Lieutenant Colonels Todd Lowrance (left) and Travis McKnight (right) share roots in Lewisburg and now have both commanded the 176th Combat Sustainment Support Battalion, a National Guard unit based in Johnson City. McKnight passed command of the unit to Lowrance in a change of command ceremony earlier this month.