In a rivalry that goes back many decades, the Forrest Middle School Rockets hosted the Community Middle School Vikings Monday night at Chapel Hill in an opening round game of the 58th Annual World … 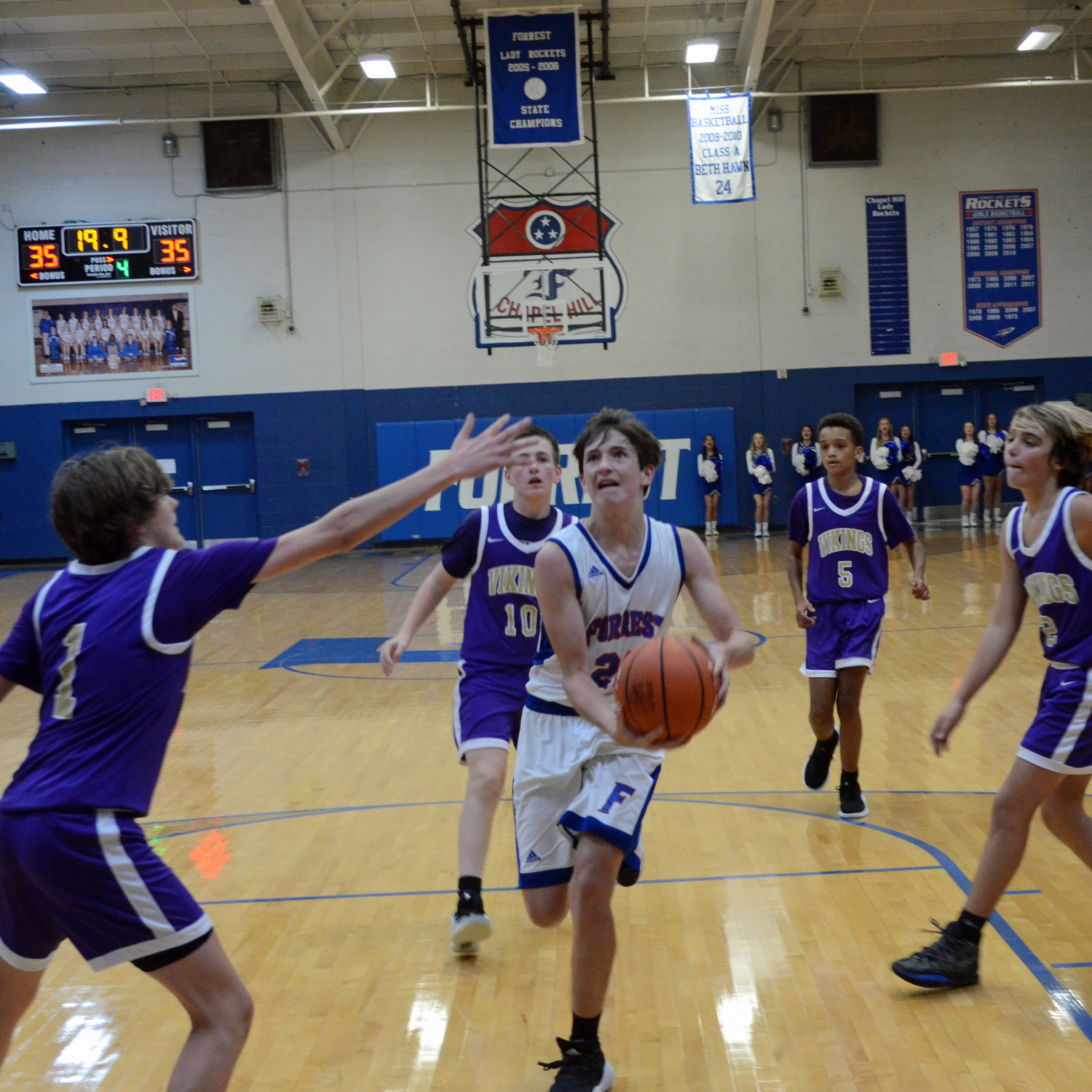 Forrest’s Eli Bell, who led all scorers in the game with 19 points, drives to the hoop for the go-ahead basket with 19.9 seconds left in the contest.
Tribune photos by Anthony S. Puca 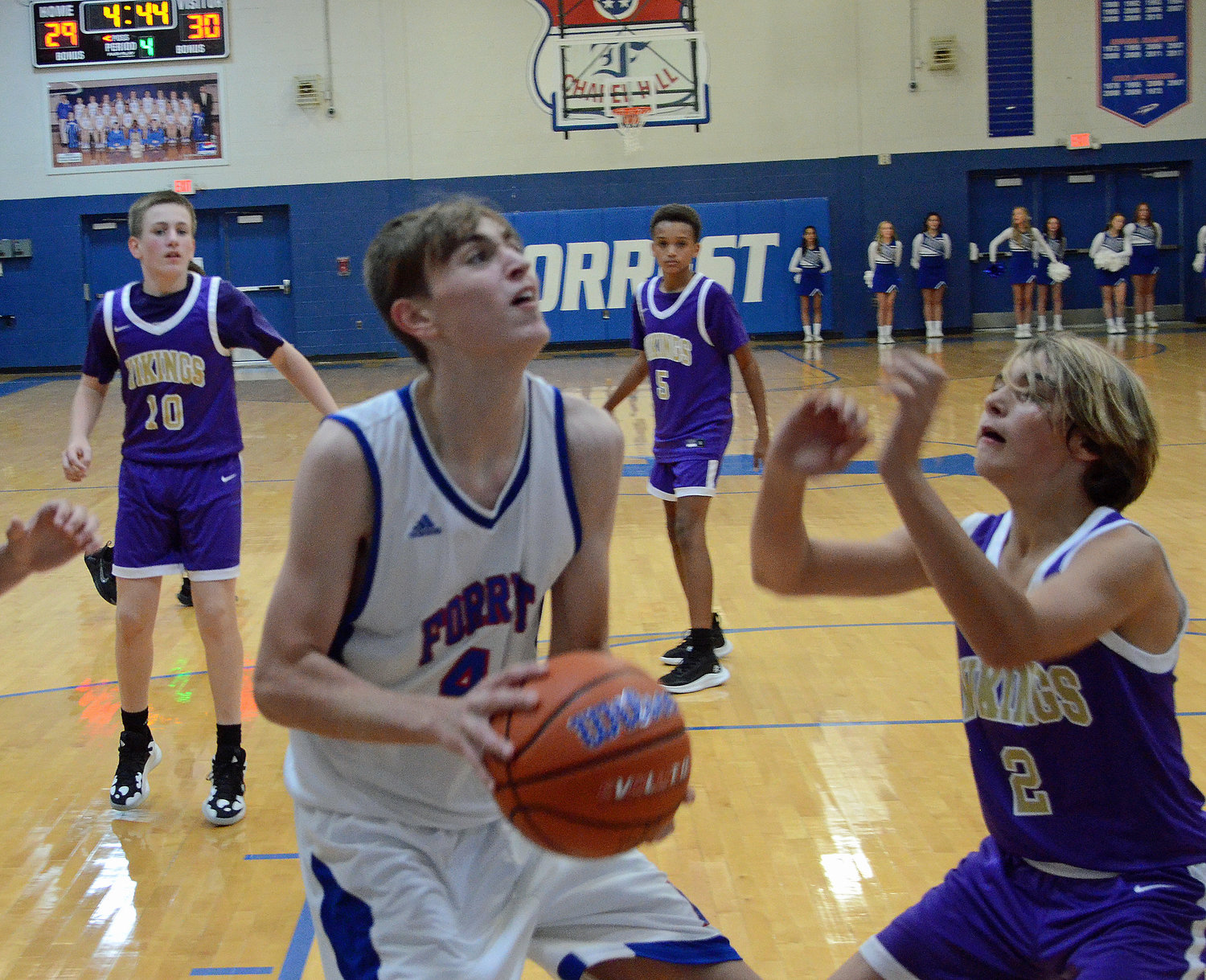 Josh Doud gets ready to knock down two of his six fourth quarter points in the low post in the Rockets’ 38-35 season opening win over Community in Monday night’s opening round of the World Tournament at Chapel Hill.
Previous Next
Posted Wednesday, October 20, 2021 10:52 am
By Anthony S. Puca Sports Writer

In a rivalry that goes back many decades, the Forrest Middle School Rockets hosted the Community Middle School Vikings Monday night at Chapel Hill in an opening round game of the 58th Annual World Tournament.

It was also the season opener for both squads and drama did not disappoint the large crowd, except maybe for some Vikings’ fans as the Rockets trailed at the end of all three quarters before outscoring Community 13-5 in the fourth quarter to claim a 38-35 win.

Forrest’s Eli Bell led all scorers in the contest with 19 points, including the game winning basket with less than 20 seconds to go in the game.

Josh Doud also had a big night for the Rockets with all 10 of his points tallied in the low post and six points coming in the fourth quarter comeback.

Fletcher Fields had all four of his points in the second half, Jacob Tincher made two third period free throws, Trent Williams had one low post bucket, and a hobbled Houston Matlock made one-of-two from the free throw line to seal the win with just a few seconds to go.

The Rockets trailed 8-4 after the first quarter and by the same four-point margin at the half, 18-14.

The Vikings kept the lead throughout the third period and went to the final quarter up 35-30.

Doud singlehandedly brought the Rockets back as they fed him in the low post on three out of four possessions to start the fourth quarter in which he converted every time to go along with a Fields steal and score and an 8-0 run for a 33-30 lead with 4:35 left in the contest.

Community responded with a Noah Watson bucket and two free throws by Zach Leathers to regain the lead at 1:42 left in the game.

Bell put Forrest back in front in the see-saw affair and Moe Berman tied it up at 35 with one free throw for the Vikings before Bell drove the lane and nailed the go-head bucket with 19.9 seconds remaining in the game.

A Vikings miss on an attempted tying bucket led to Matlock stepping to the free throw line and making one of two to seal the season opening win for the Rockets.

The Rockets play the Cascade Champions in Thursday night’s second round with tipoff scheduled for 8 p.m.

The World Tournament championship game is Saturday at 7 p.m.