This past week I had the pleasure of interviewing KJ Johnson, a 2019 MCHS graduate and basketball standout, who will start his sophomore year at Lipscomb University this fall.

Johnson recently completed his freshman year online due to the COVID-19 pandemic. 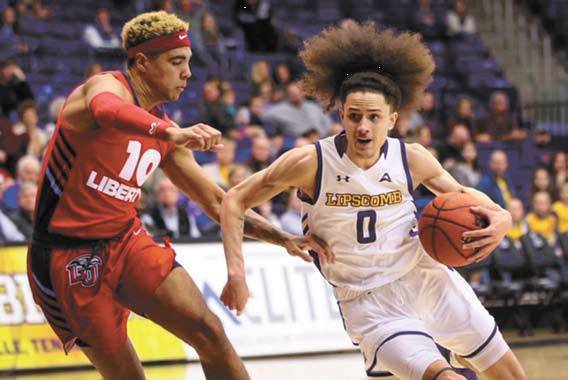 This past week I had the pleasure of interviewing KJ Johnson, a 2019 MCHS graduate and basketball standout, who will start his sophomore year at Lipscomb University this fall.

Johnson recently completed his freshman year online due to the COVID-19 pandemic.

Johnson planned to stay on campus most of the summer and help oversee various kids’ basketball camps, but due to the pandemic his plans changed and he has been back in his hometown since March.

While in Lewisburg, Johnson is staying in shape by running, weight training, and is on a supervised meal plan. “I am working on getting stronger,” Johnson said. “People have underestimated my appearance in the past. I proved them wrong through by athleticism.”

Johnson won back-to-back Class 2A TSSAA Mr. Basketball Awards in 2018 and 2019 and he is Marshall County High School’s all-time leading scorer with 2,720 points, averaging 34.8 points per game, with 114 3-pointers.

Not only did he break the MCHS record of scoring the most points in four years, but also broke MCHS’ single-game record with 57 points. He also had three 50 point games and nine 40 point games.

The most exciting game that he remembers in high school was during his freshman year in a state sectional contest at Maplewood.

With only a few seconds remaining in the game, Curtis Keiler nailed a layup, advancing the Tigers to the state tournament.

Johnson said it was so exciting for his team to make it to the state playoffs and more exciting to beat a great team such as Maplewood.

During that season, Johnson learned how to be a stronger player by watching his teammates and listening to MCHS coach Arnett Bodenhamer.

Johnson played with an EAB travel team, which allowed him to expand his game because he went up against some of the toughest competition in the country.

I asked Johnson what advice he would give to younger basketball enthusiasts who were interested in playing college ball. “Don’t listen to critics. Just because of your size, it doesn’t mean you can’t strive for what you love. Work hard and listen to your coaches,” Johnson said. “The sky’s the limit, I’m proof of that.”

Johnson said he was nervous when playing his first game as a Lipscomb Bison. There were more spectators than in high school and his opponents were bigger and faster than him, but the butterflies soon disappeared after making his first 3-pointer and he became more confident with each basket he scored.

Johnson also fit in well with his teammates, which was a great blessing.

“It was a hard transition from high school play to Division I college play, but I knew I had to adjust and it became easier with each game. Being double-teamed in high school helped me tremendously,” Johnson said.

“(Lipscomb) coach Lennie Acuff, who is a great offensive coach and a genius in basketball knowledge, helped me with this adjustment.”

Johnson proved he can play against the best as he finished his freshman season with the Bison averaging 11.2 points per game. He scored in double digits in 9-of-10 games played and scored 25 points against Xavier University. This shows what a great athlete Johnson is. 25 points a game and only a being freshman proves he worked hard.

Johnson has three years of eligibility remaining. “This next season we will be stronger and hopefully we will be in conference play again. I am looking forward to practicing with my team as well as hitting the courts in game play,” Johnson said after I asked him about his future in playing his favorite sport.

KJ Johnson is a great competitive athlete who has a winning attitude and dreams that will take him far. Marshall County is proud of you KJ and we look forward to your future basketball seasons.