LORETTO — It was a first half-battle Friday night between the Forrest Rockets and the Loretto Mustangs.In the end, the Mustangs (2-1, 1-0) claimed the showdown, beating the Rockets 44-28 … 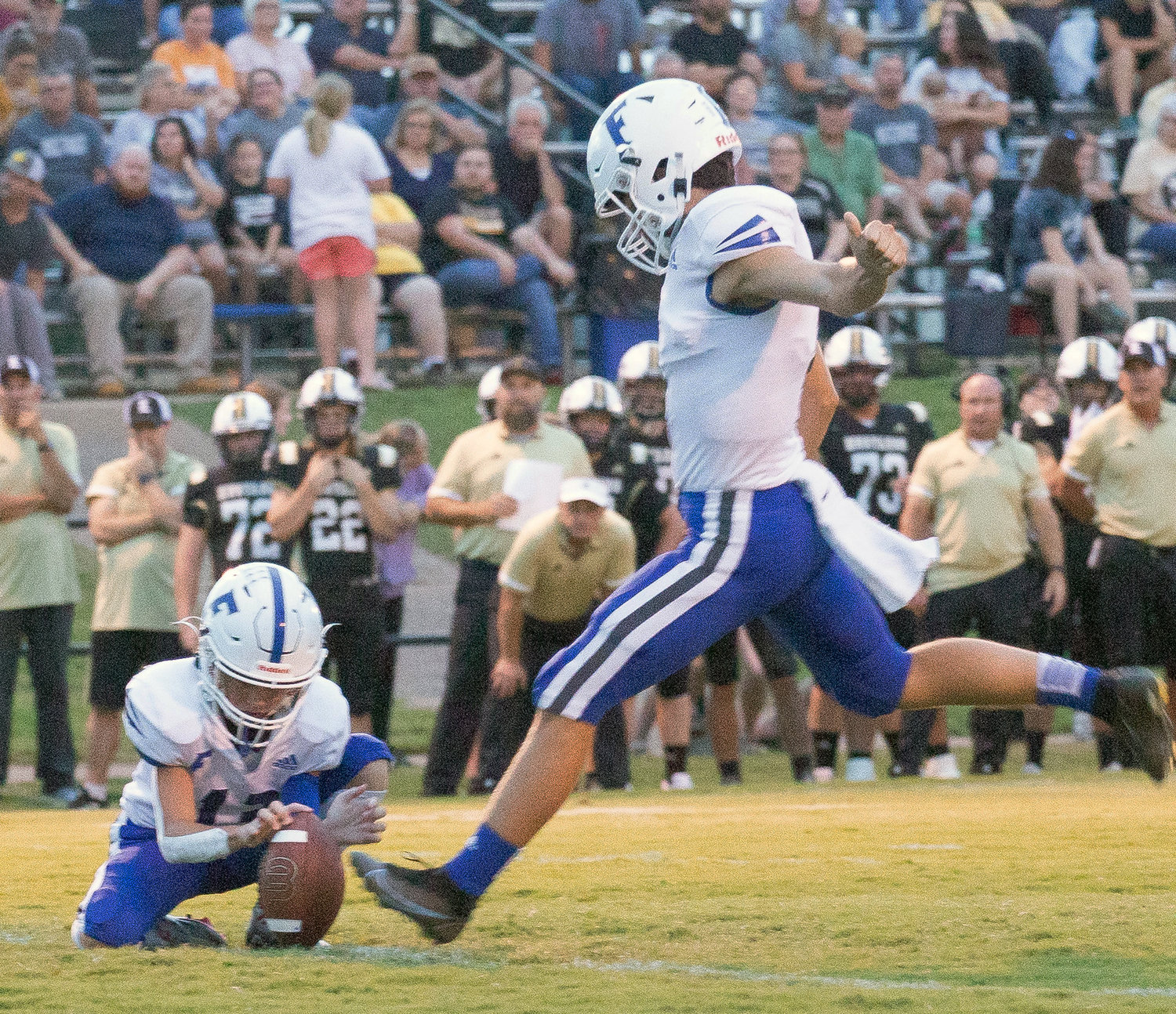 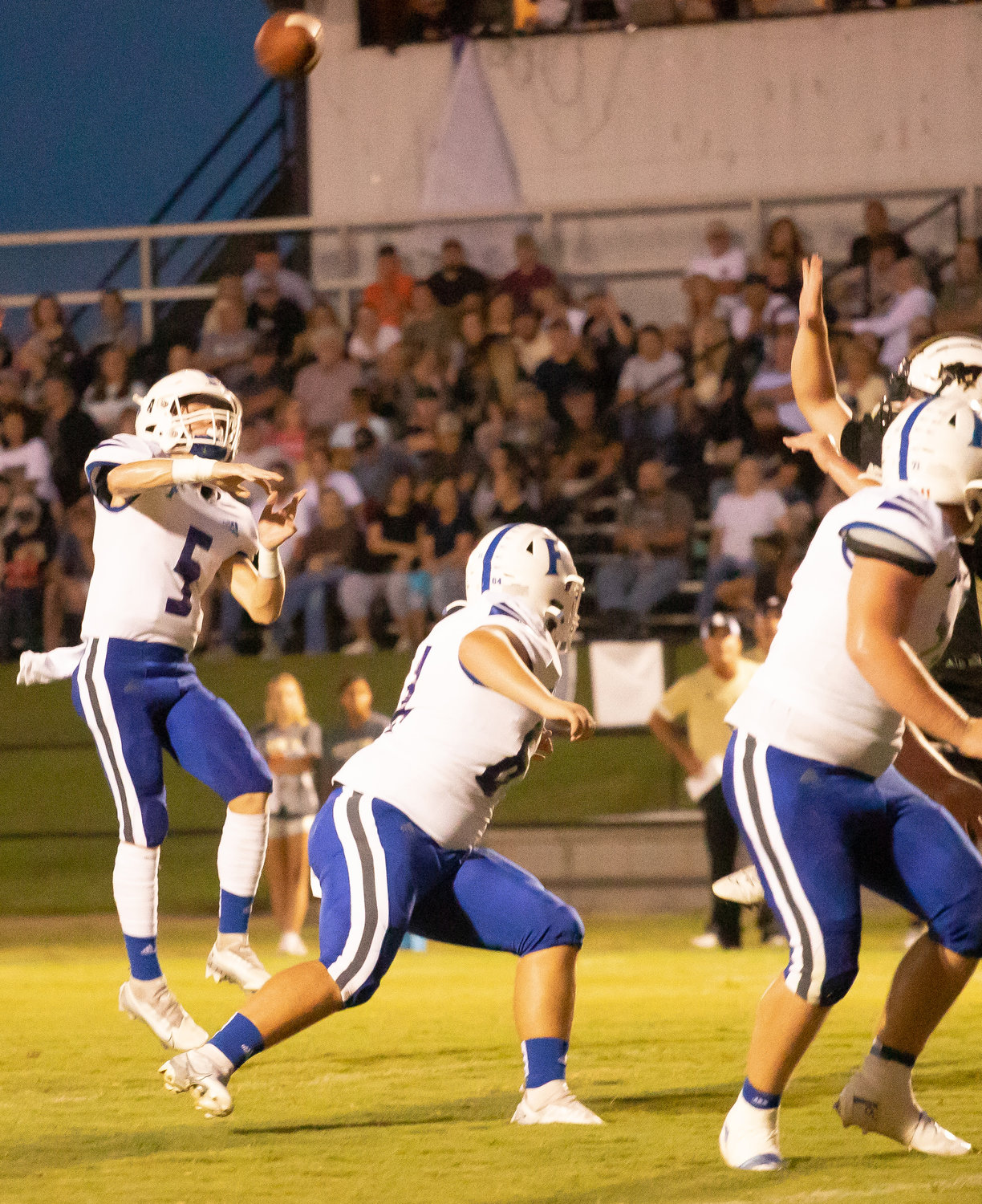 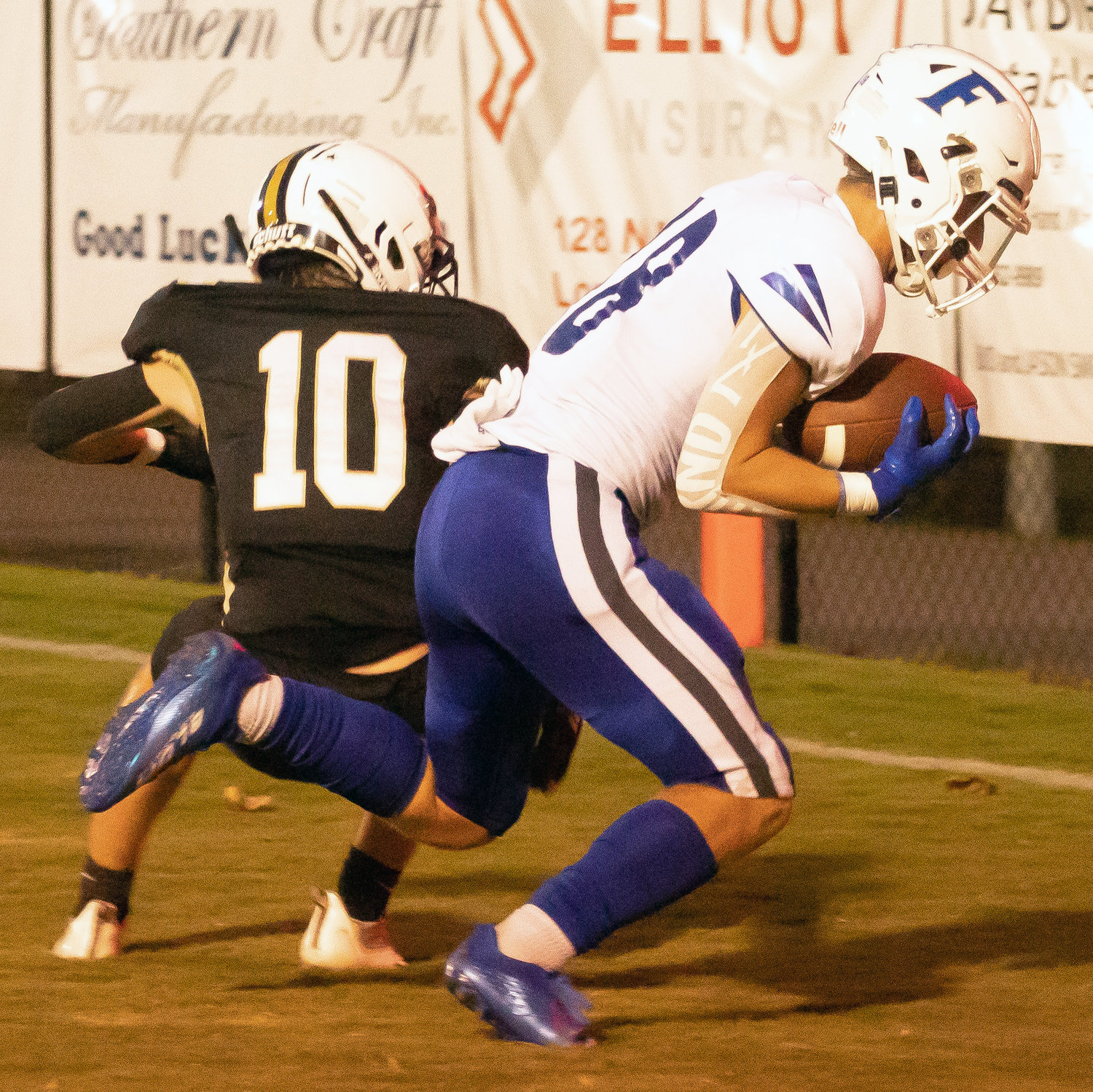 LORETTO — It was a first half-battle Friday night between the Forrest Rockets and the Loretto Mustangs.
In the end, the Mustangs (2-1, 1-0) claimed the showdown, beating the Rockets 44-28 to take the Region 5-AA opener.
Both the Rockets (2-1, 0-1) and Mustangs showed up eager to play their first region game with the Rockets getting a sack only four plays in.
But, Loretto was not fazed.
Within four minutes, a multitude of Mustangs carried the ball downfield, resulting in a 24-yard Caden Porter touchdown run.
Minutes later, Chris Davis floated into the end zone on a six-yard carry for the Rockets with 3:05 left in the first quarter. After the Gavin Grissom extra point, Forrest evened up the score at 7-7.
It was Loretto’s turn again, scoring on a 59-yard Carter Daniel pass to Corben Reynolds and an 18-yard pass to Clint Seymore, which was the result of a Forrest fumble.
The Mustangs stretched their lead to 21-7 with 1:29 remaining in the first quarter.
“On offense, we were able to move the ball all night long,” said Forrest Head Coach Eli Stephenson. “We’ve just got to limit turnovers.”
Forrest wasn’t done, however.
A host of Rockets teamed up to carry the ball upfield and despite a 10-yard penalty thrown in the mix, quarterback Ryan Hill connected with Tyler Ayers on a 14-yard touchdown pass, cutting the Mustang lead to only one possession.
“We made some great passes,” said Stephenson.
“Ryan Hill, he threw the ball pretty well. We caught a touchdown pass with Ayers, and we were trying to crawl back into the game, and we just couldn’t at the end.”
After a 23-yard field goal by Loretto, the showdown continued with Tayton Swift going on a 35-yard sprint across the goal line and Porter tacking on another six for the Mustangs.
At the half, Loretto led 31-21.
The Rockets returned in the second half without junior Jesse Lindeman, who was injured during the second quarter.
“Lindeman is a big part of our offense,” said Stephenson. “He plays offense, defense, and special teams. He plays outside linebacker and tight end, and all our thoughts are with him and our prayers are out for him. We just hope for a full recovery.”
Starting the second half, the Rockets were forced to punt, the first for either team on the evening, but came out strong defensively, including a big stop by Liam Bell on a third down.  “We knew they could throw the ball. We knew they had a good running back. We knew we had to come out and get stops,” Stephenson said.
Though the Mustangs turned the ball over on downs, they soon received possession after another Rocket fumble.
Porter became tough to handle, scoring on a 54-yard run with 16 seconds left in the third quarter.  “We were down, and we had to come out fighting,” Stephenson said. “We had to get that opening kickoff, but we sputtered out and had to punt. We have to be able to finish that drive. When we had to punt, that kind of hurt us.”
The start of the fourth was plagued with flags on both sides to include a 10-yard penalty for the Rockets.
Swift had a 28-yard carry, getting the Rockets into better position for the Hill two-yard scamper into the end zone.
Grissom added the extra point, but Loretto still held the lead 38-28.
Unfortunately, Forrest was unable to answer. With 5:08 left to play, Daniel fired a 33-yard pass to Seymore for the Mustang touchdown, although the extra point was no good.
“I’ve got to do a better job during the week of getting the kids ready to play on Friday night,” Stephenson said. “I didn’t do a good job of that. We showed up and we weren’t ready to play.” The Rockets will play at home next week for their homecoming game against Moore County.
Kickoff is scheduled for 7 p.m.