CORNERSVILLE — Ady Gentry went for 19 points and the Cornersville Lady Bulldogs rallied from a slim halftime deficit to defeat their rivals from Lewisburg on Tuesday night, 43-36. … 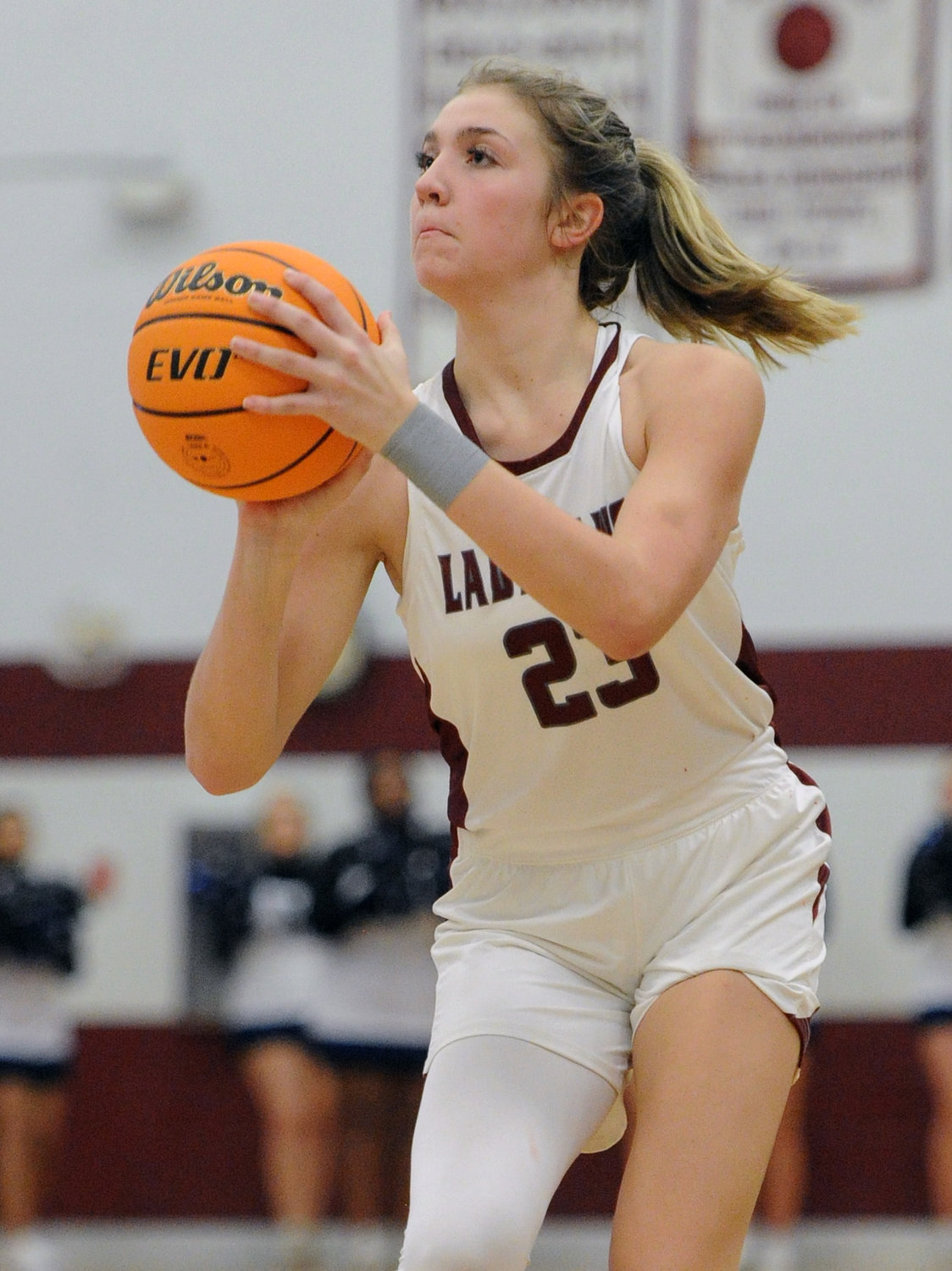 Ady Gentry pulls up for a shot for the Lady Bulldogs. She led all scorers with 19 points.
Tribune Photo by Chris Siers 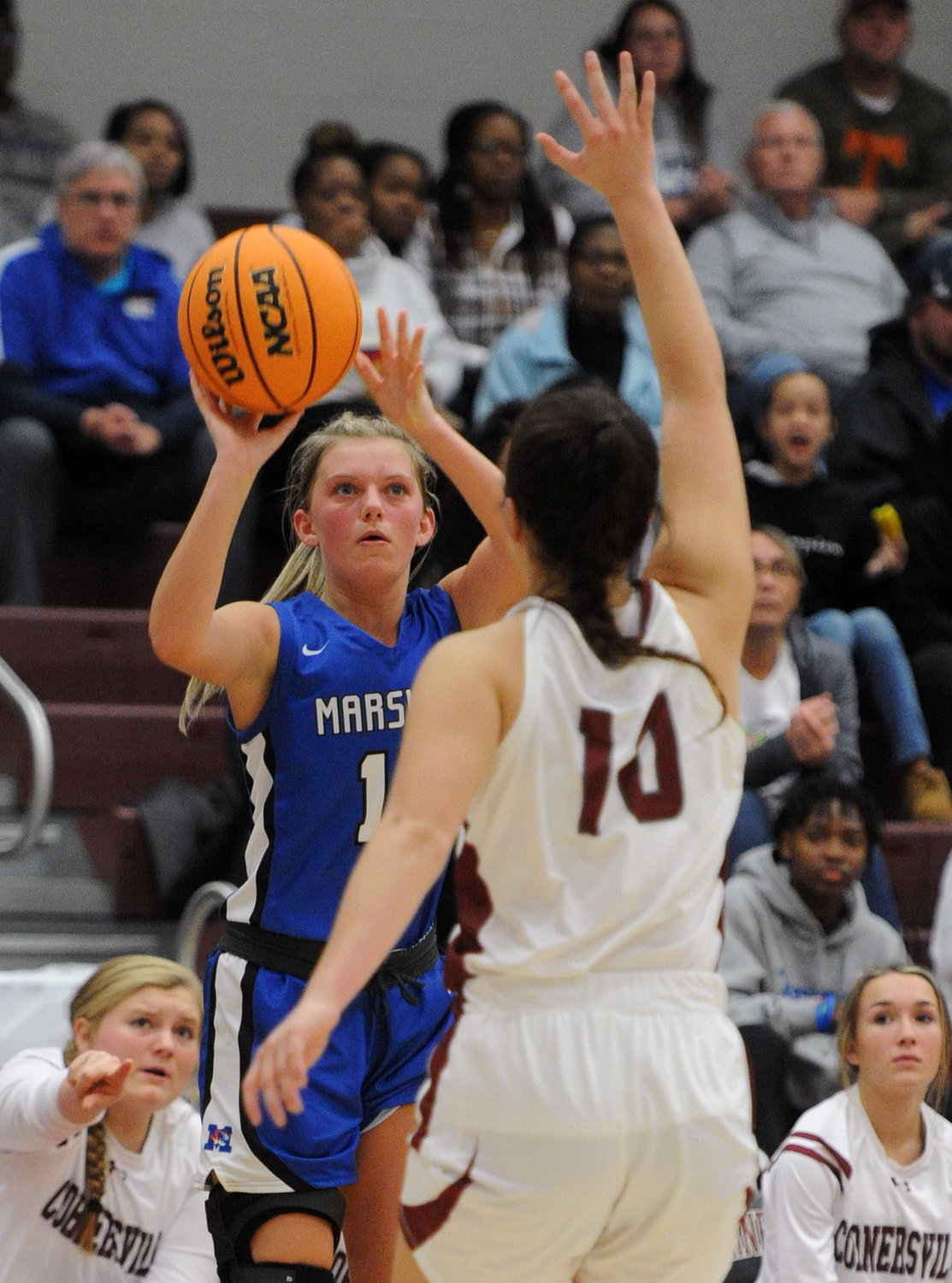 Caraline Hollingsworth pulls up and drills a three-pointer to give the Tigerettes a slim lead at the half.
Tribune Photo by Chris Siers 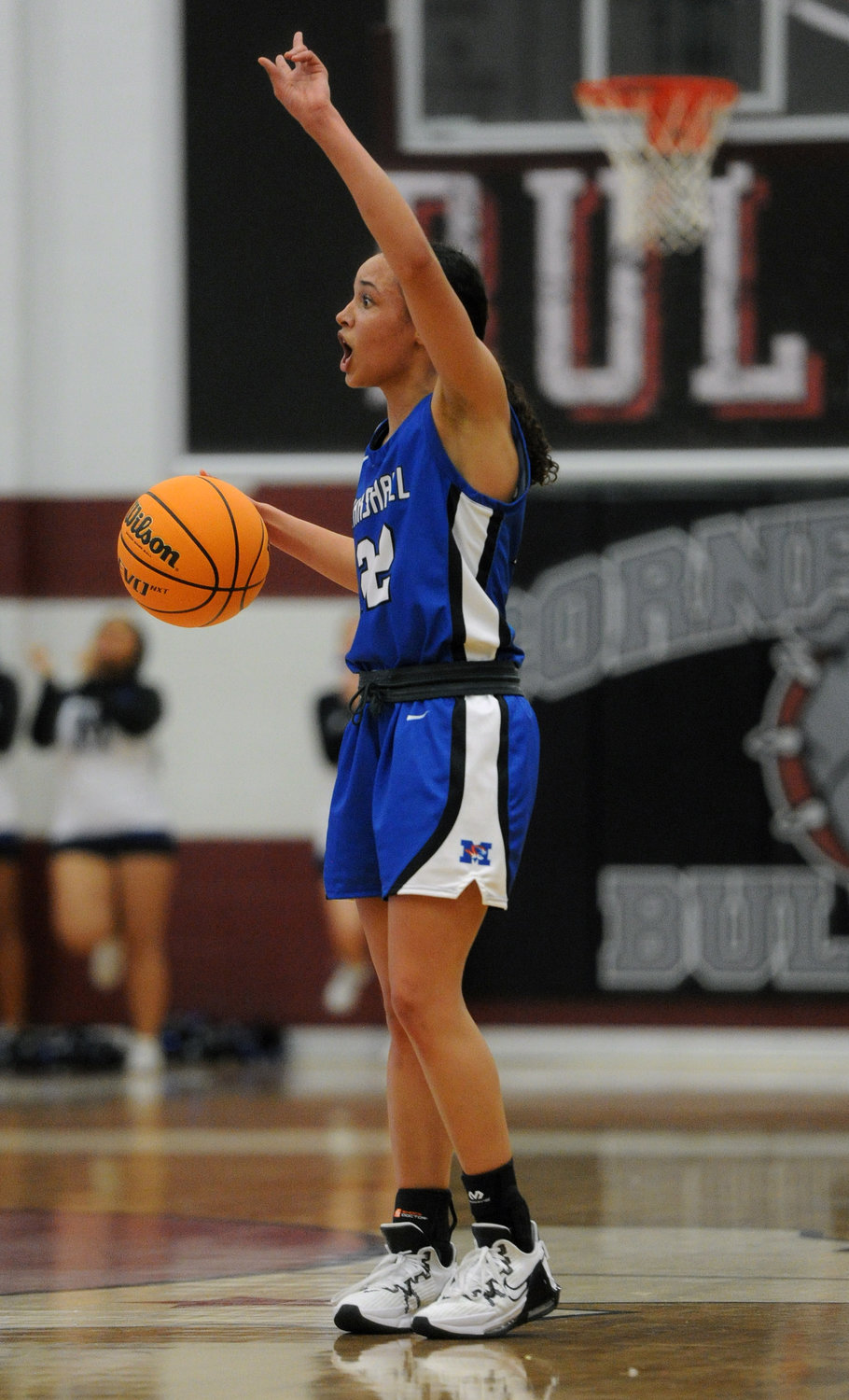 Kayla Keiler sets up the Tigerette offense in the half court.
Tribune Photo by Chris Siers 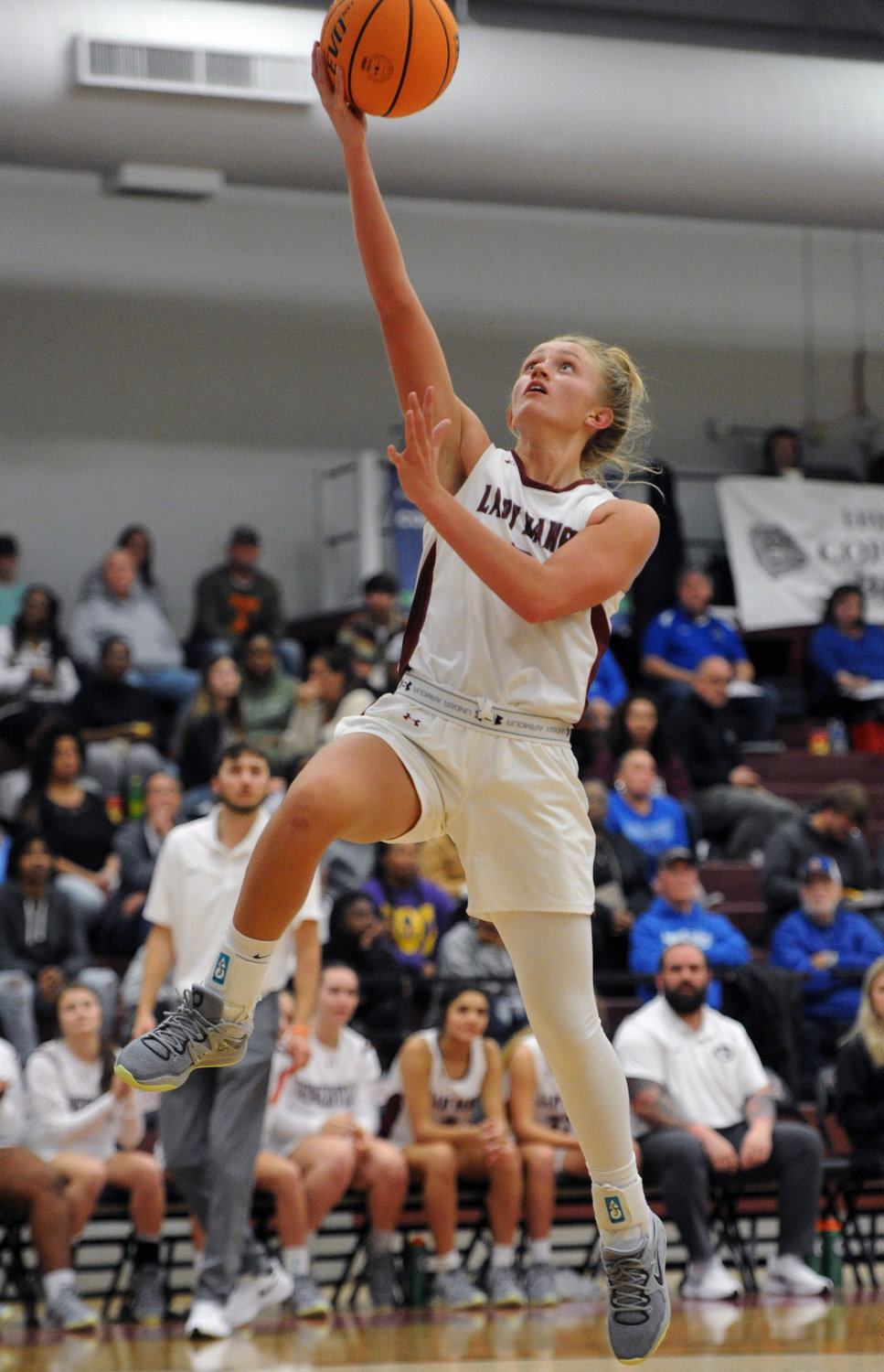 Alicia Polk flies to the rim and caps a fast break with a layup.
Tribune Photo by Chris Siers 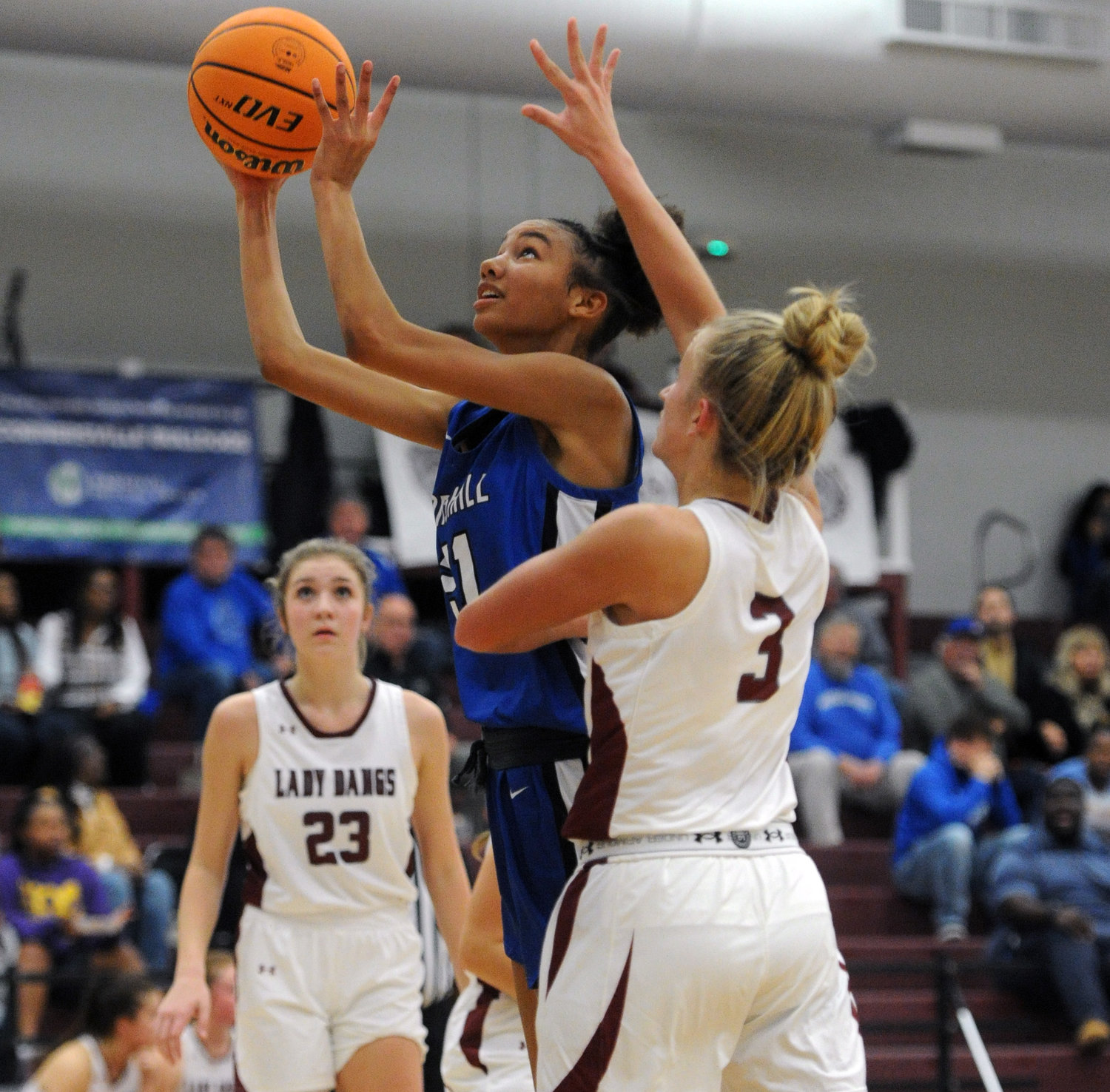 Mashawna Ridley draws heavy contact as she fights her way to the rim.
Tribune Photo by Chris Siers 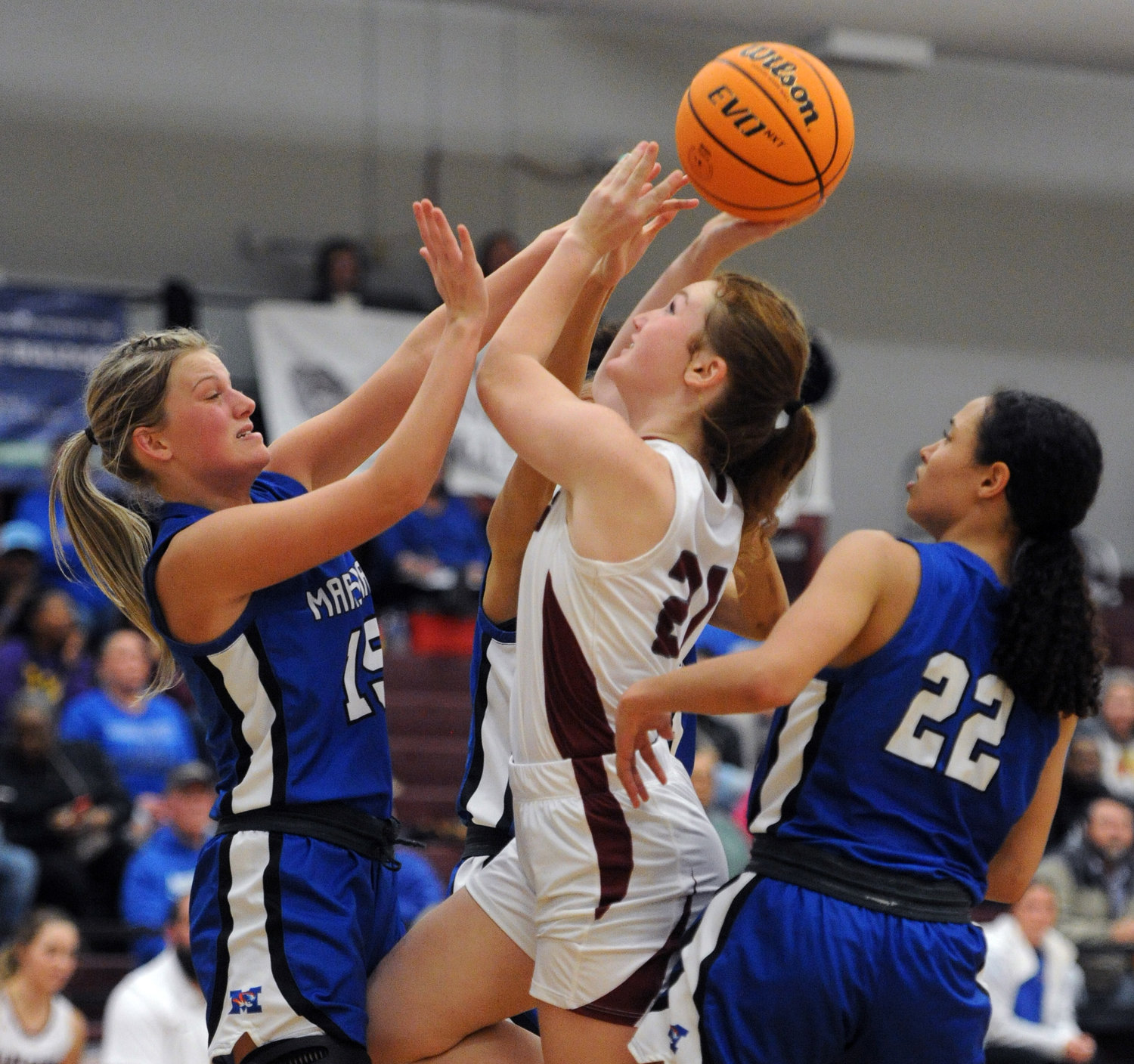 CORNERSVILLE — Ady Gentry went for 19 points and the Cornersville Lady Bulldogs rallied from a slim halftime deficit to defeat their rivals from Lewisburg on Tuesday night, 43-36.
“She (Gentry) was huge tonight scoring and rebounding. I love the way she played,” Cornersville coach Hayden McMahon said.
“She was a difference maker. We did a pretty good job on Wood and Polk, but not good enough on her. We just have to be a little better on post defense. Offensively we have to make better decisions. Even after the bad third quarter, we had a chance. We just weren’t consistent enough,” Marshall County coach David Steely said.
Cornersville jumped out to the 11-7 lead after the first frame, but saw the Tigerettes rally behind a 14-point second frame. with nine combined points from Jacelle Ridley and Kayla Keiler.
With five seconds to go in the half and the score deadlocked at 18, it was Caraline Hollingsworth who drilled a three-pointer from the wing to give Marshall County a three-point lead at the intermission.
That lead didn’t hold for long as the Lady Bulldogs were able orchestrate a 14-3 run through the first six minutes of the frame.
The Tigerettes managed just one shot from the floor, a basket by Hollingsworth with 5:55 left in the third, through the first six minutes of the quarter.
Cornersville on the other hand was able to get three treys in the quarter from Anna Wood, Jayli Childress and Katie Powers.
That perimeter shooting spurred on a 16-point quarter and gave the Lady ‘Dawgs a cushion on the scoreboard.
“We weren’t really making many shots in the first half but we came in the locker room and adjusted. We were a little flat in the second quarter, but then scored 16 in that third quarter. I thought that was big for us,” McMahon said.
“They swung hard at us at the end of the second quarter and then we came back out and swung back at them in the third quarter.”
But even with the several possession lead at multiple points in the second half, the lead never truly felt safe as Marshall County continued to make shots.
“Even there late, we hit a three and cut it to three, but we tried to jump in a press and they got an easy shot. That was kind of it. They played better than us. They have a good team and know what they do in their roles. We get another shot when they come to Lewisburg. We’ll be ready,” Steely said.
Genty’s 19 points led five Lady Bulldogs in scoring, while Mashawna Ridley led the Tigerettes with 11 points.
The two teams meet again on December 15 for their second meeting this season in Lewisburg.
On Friday, the Tigerettes will host Glencliff in Lewisburg, while the Lady ‘Dawgs travel north to face their rivals from Chapel Hill for a 6 p.m. tip-off at Forrest.