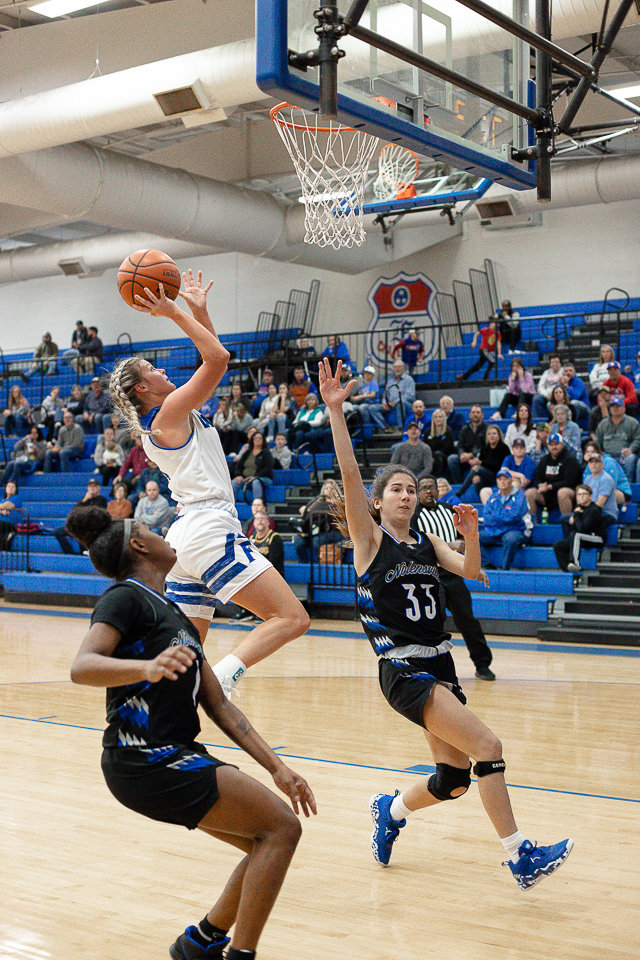 CHAPEL HILL — The Forrest Lady Rockets (1-3) hosted a lengthy Nolensville Lady Knights (1-0) team in Chapel Hill Tuesday night, losing the non-conference game 48-32.
Each half of the contest brought very different results.
The Lady Rockets came out strong, getting open shots from the perimeter and the paint. Even with the height advantage, the Lady Knights stacked their points from the outside.
“We knew their size was going to be an issue,” said Head Coach Hal Murrell. “That’s why we were trying to double their post. They hit some three’s early on from the corners with an overload, but even at halftime, it would have been a one-possession game if we hadn’t given up an uncontested three-pointer right at the buzzer. Even with the shots that they hit, it was still a very winnable ballgame at that time.”
Forrest went into the locker room at the half trailing by seven.
Nolensville kept up the pace in the second half, creating a 15-point gap five minutes into the third quarter, and applying the pressure with a full-court press, creating the opportunity to score on multiple turnovers.
“I feel like some fatigue set in on our part,” said Murrell. “I’ve got two or three players that can’t come out. Second chance points were huge for them. We have an inability to box out and they always seemed to find an open three ball when they got an offensive rebound. So, just them capitalizing on second chance points and our inability to score. It’s just huge and it’s going to be that way all year until we get some things fixed.”
“Unfortunately, we have a huge inability right now to score, other than Macyn Kirby. And we’re not very consistent with our perimeter play and we’re very undersized with the injuries that we have. They had a few girls that knocked some shots down, but with no more points than they scored, if we could have scored at all, it would have been a very competitive ballgame,” Murrell added,
Kirby led the Lady Rockets with 18 points on the night, most notably coming up big in the second quarter with nine points to keep the Lady Rockets within reach of Nolensville.
“Macyn is the glue to everything that we do,” said Murrell. “Right now she is having to handle the ball, right now she is having to get everybody set up, she’s having to score. She’s having to defend their best player. She’s having to do a lot right now for us. We’re very fortunate to have her. Fingers are crossed that we can keep her healthy. We’ve also got to get some other players to step up and contribute and take some load off of her at some point.”
The Lady Rockets will travel to Eagleville on Tuesday to take on the Lady Eagles.
Tipoff is set for 6 p.m.