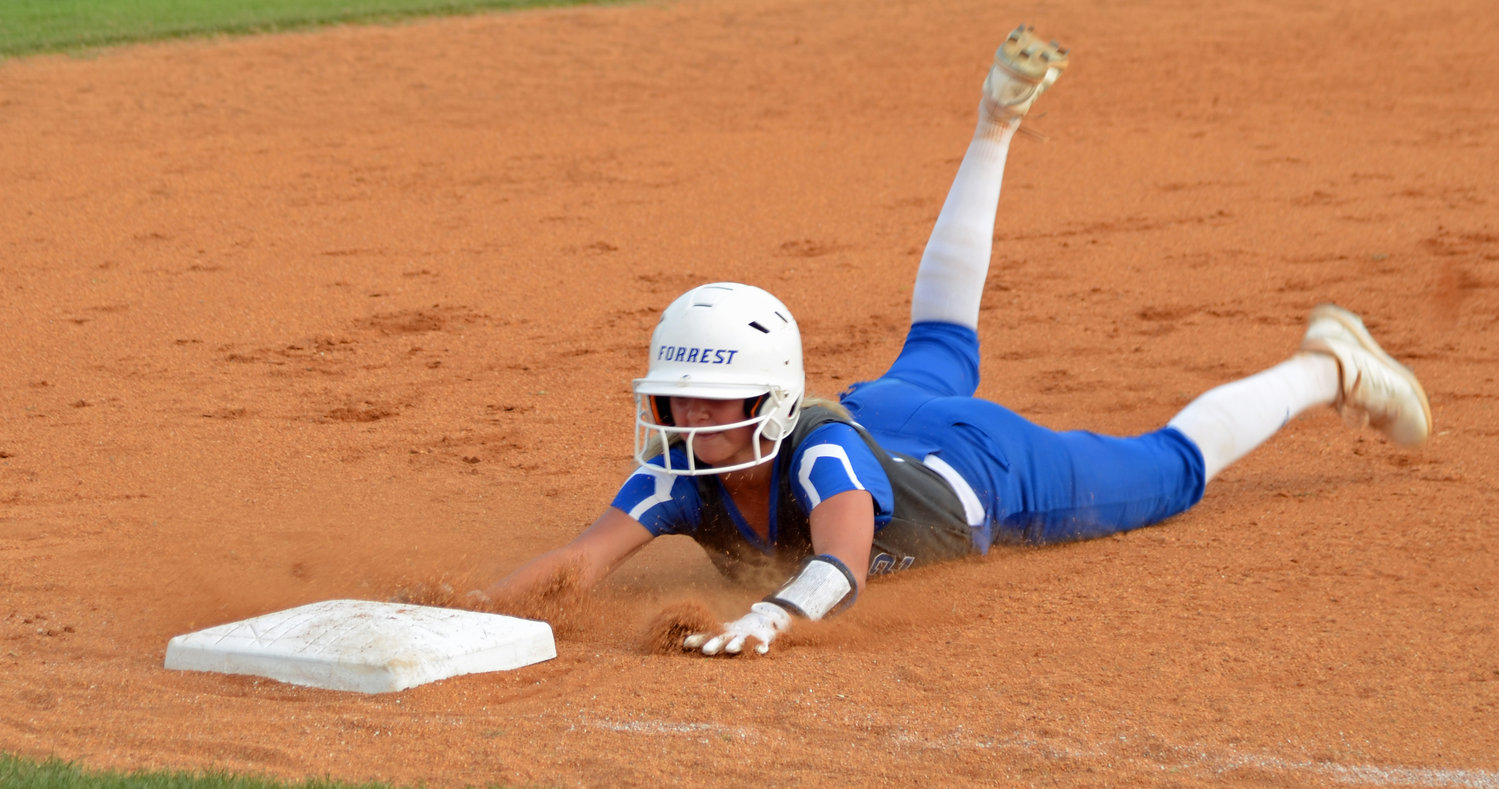 Forrest’s Macyn Kirby, who went a perfect 4-for-4 at the plate, slides safely in to third base with a leadoff triple in the bottom of the first inning.
Tribune photos by Anthony S. Puca 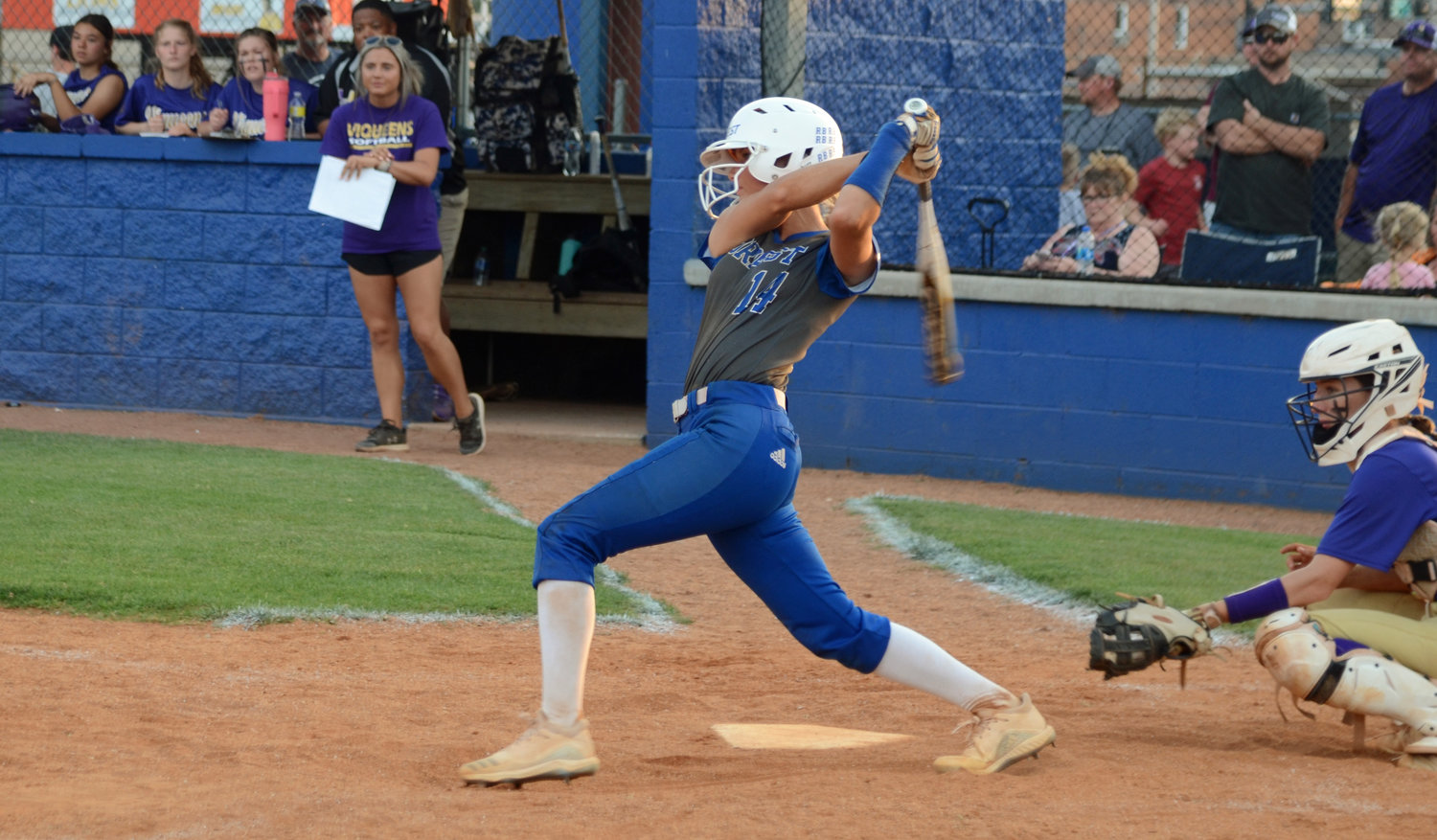 Briley Burnham went 3-for-4 in the Lady Rockets’ big 14-6 win over Community. 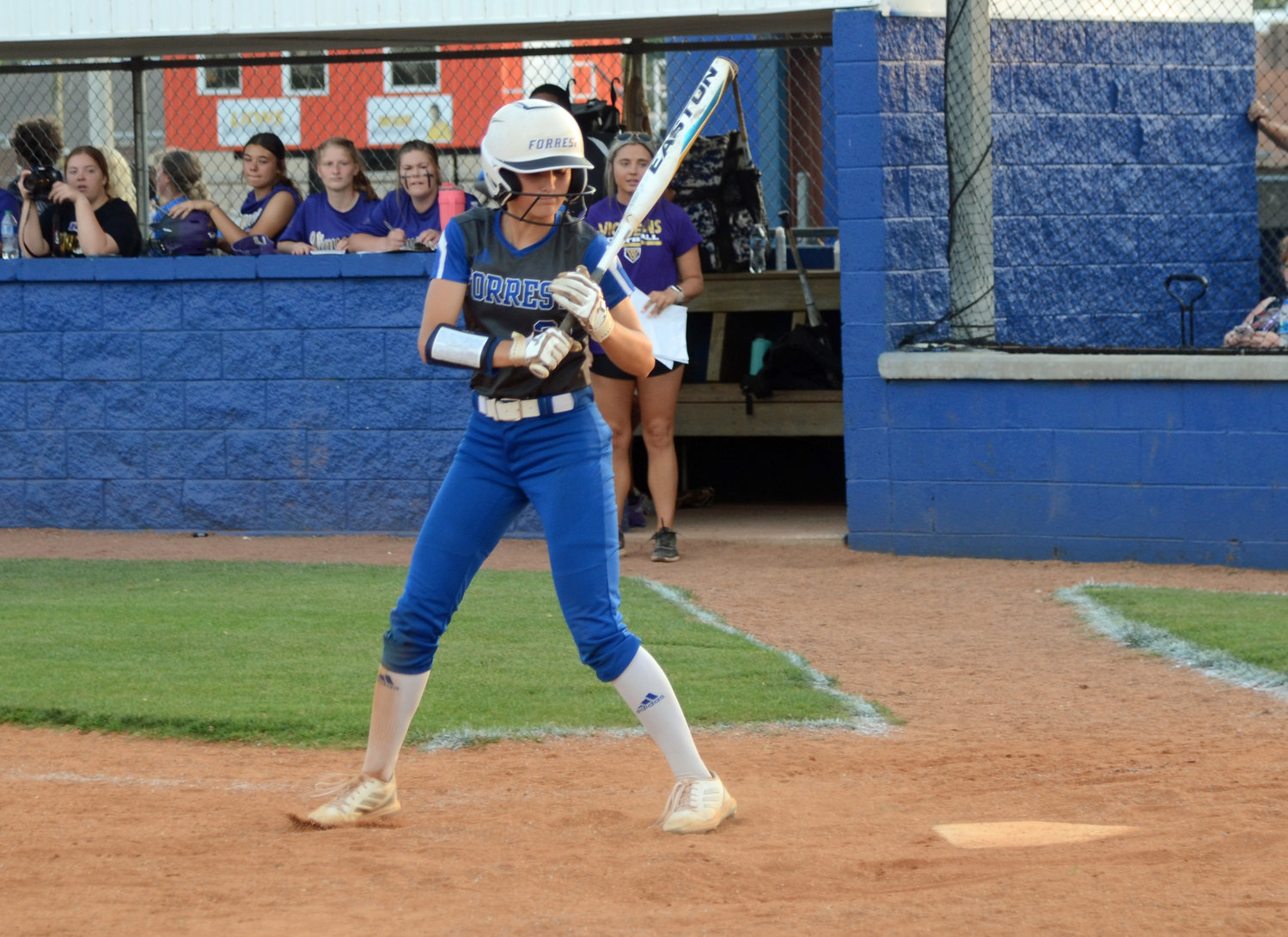 Maggie Daughrity had a productive game at the plate and turned in her usual outstanding performance in right field for Forrest. 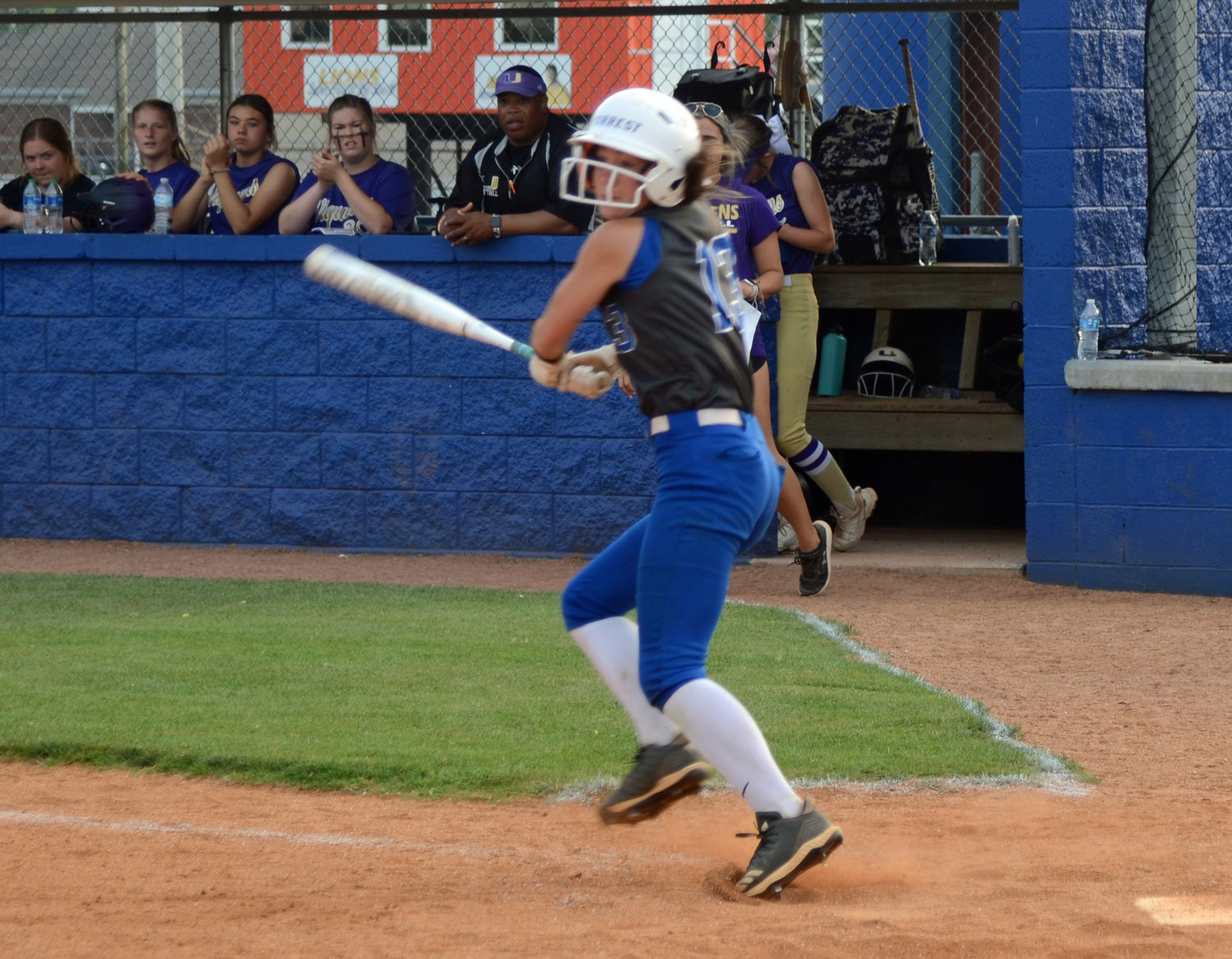 Forrest’s Addison Bunty is the lone senior on the squad and Friday night also marks graduation day for the Lady Rockets’ left fielder. 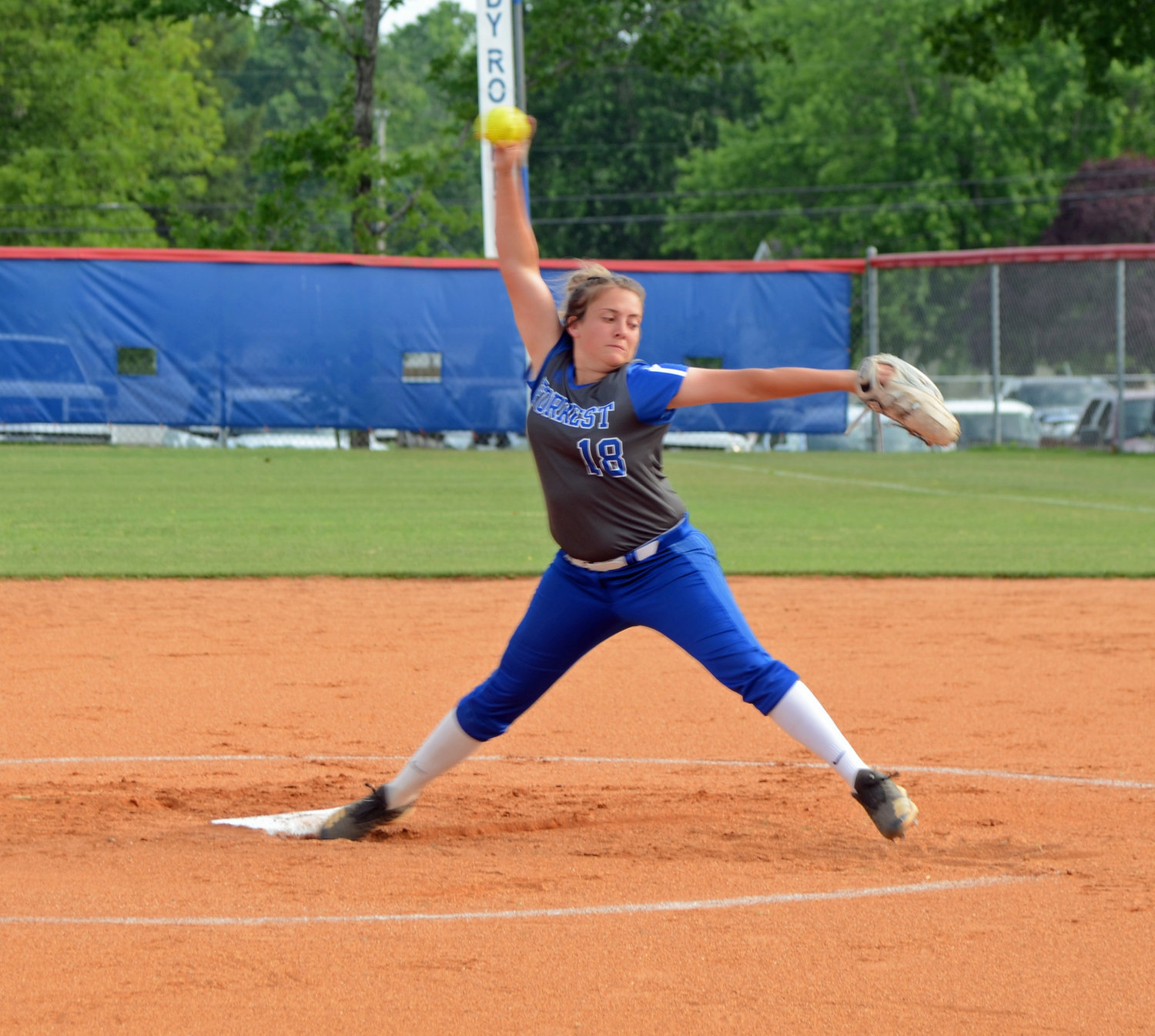 Julie Williams picked up the win in the circle for the Lady Rockets, who host Westmoreland Friday night in a Class 2A state sectional game. 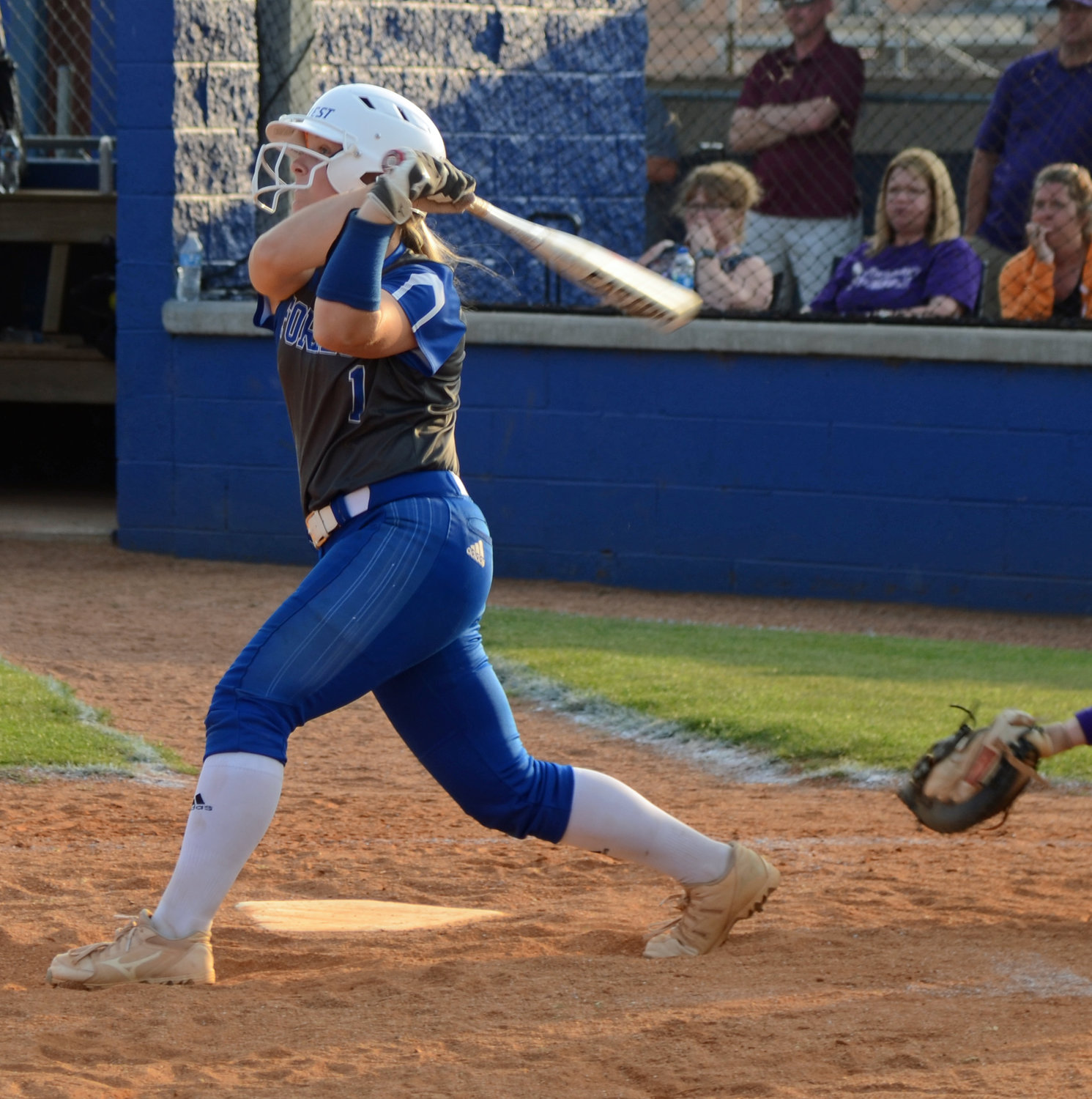 Christa Warren drives in a run with a sacrifice fly RBI in the third inning.

Carli Warner heads for home where her teammates are waiting for the junior first baseman after walloping a solo homerun in the sixth inning. 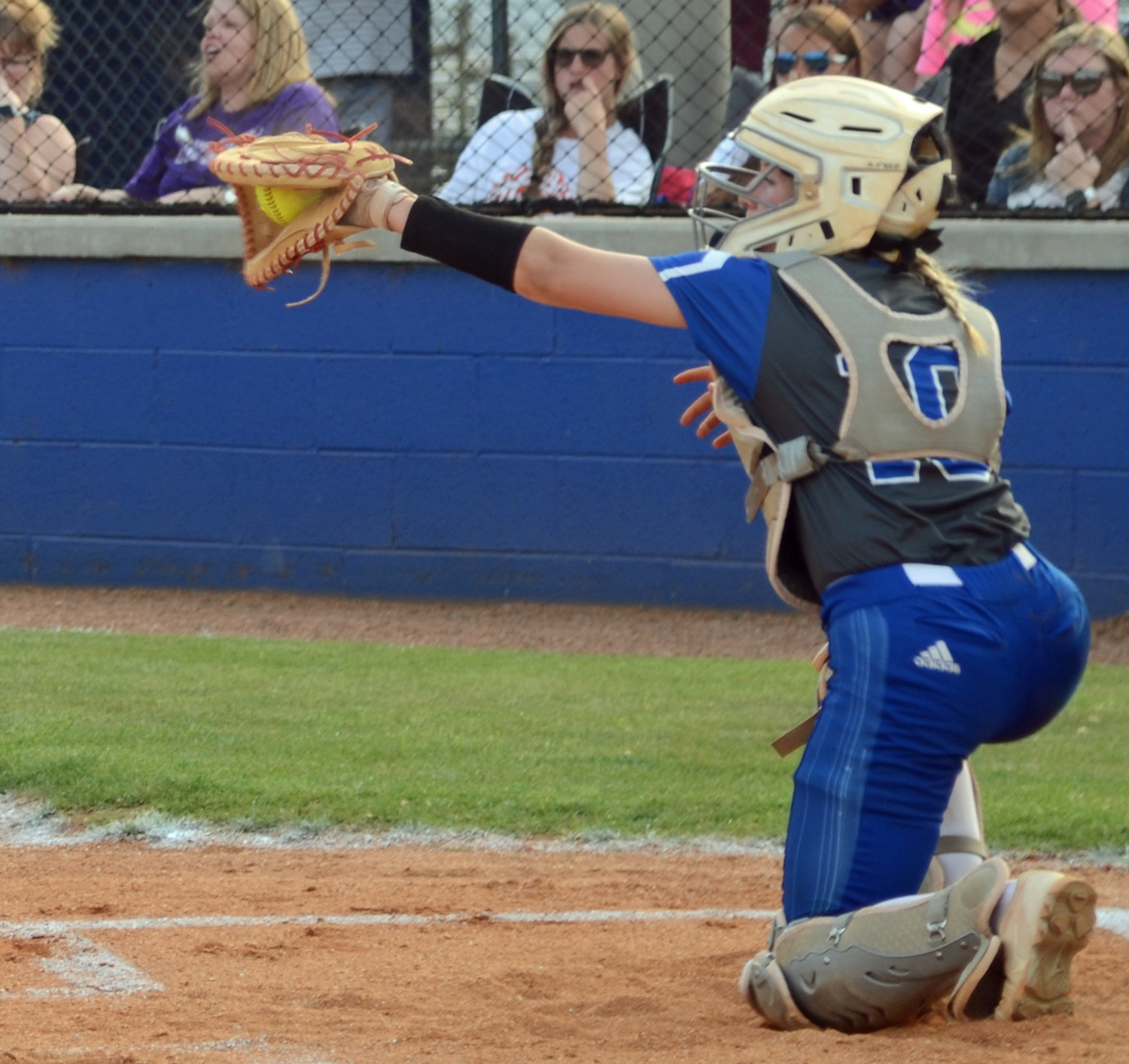 Forrest catcher Parker Wales has been a rock behind the dish and a solid threat at the plate for the Region 4-AA champion Lady Rockets. 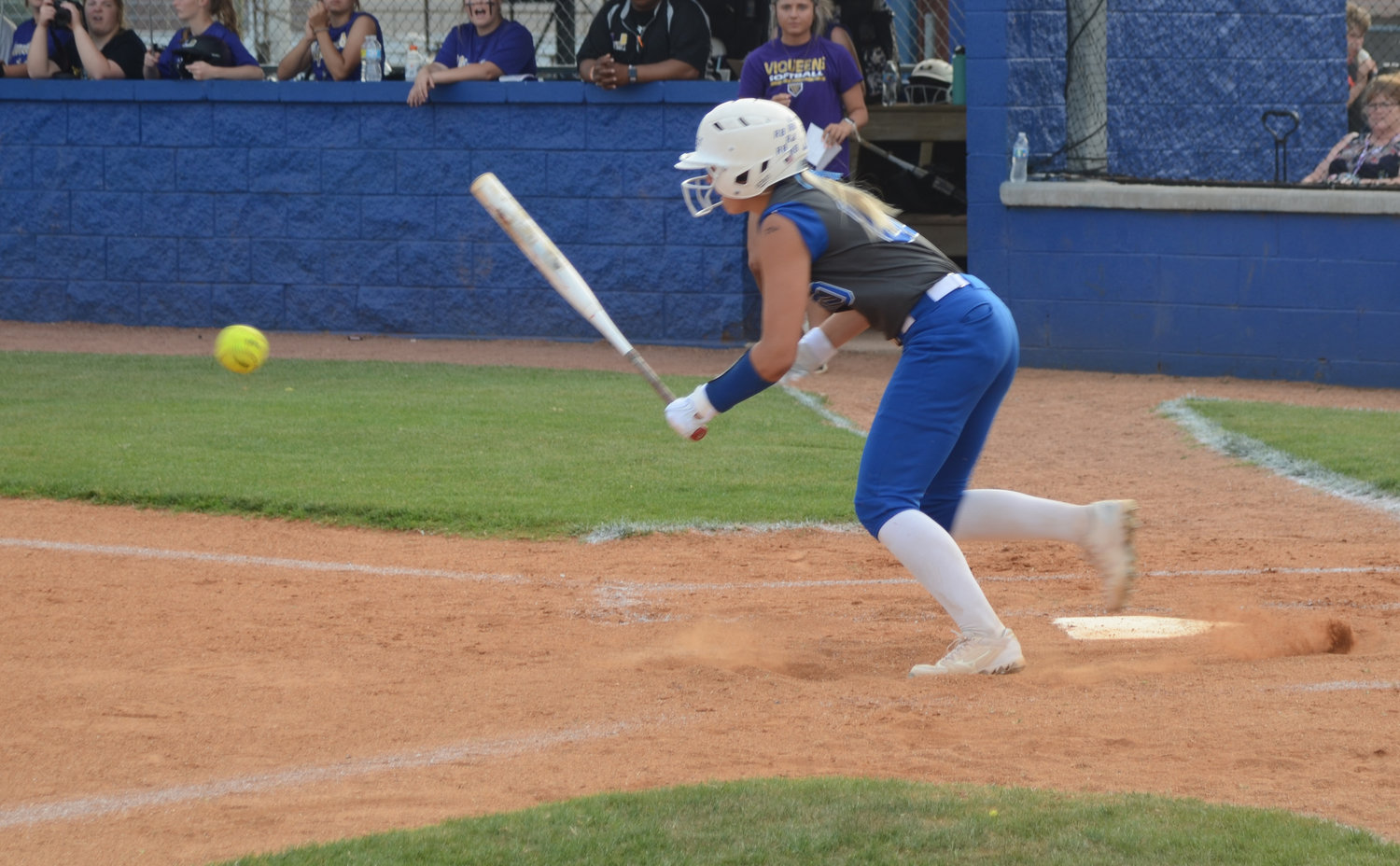 Abby Ferguson lays down a sacrifice bunt that was misplayed by the Viqueens, leading to a run in the first inning. 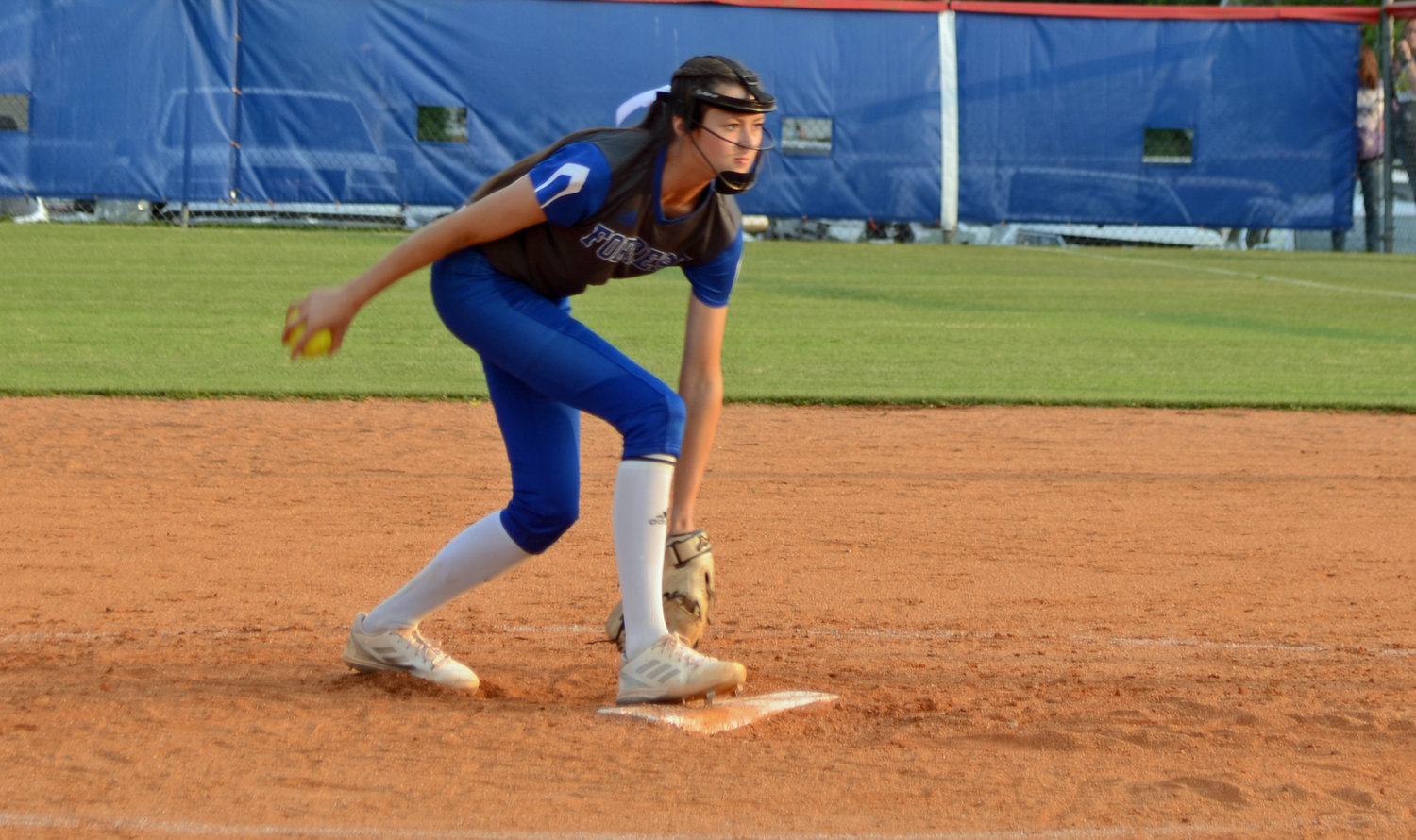 Ella Chilton came on to pick up the save, tossing the final four innings in the circle.
Previous Next
Posted Thursday, May 19, 2022 10:49 am

“Unionville is scrappy, they are feisty and they come to win and they don’t stop,” Lightfoot said. “So hats off to them for that because we never felt comfortable and we knew we had to keep scoring.””
Forrest coach Shelby Lightfoot
Anthony S. Puca ~ Sports Writer

The Forrest Lady Rockets are one win away from their 19th state tournament appearance after a convincing 14-6 win over the Community Viqueens in Wednesday night’s Region 4-AA Tournament title game at the Field of Dreams in Chapel Hill.

The Viqueens were trying to break a 20-year losing streak to Forrest and gave the four-time state champions an early scare before the Lady Rockets put the pedal to the metal, cruising to the eight-run win.

“We played them kind of close all year, so it felt good to come in and get the bats going,” Forrest coach Shelby Lightfoot said. “Still, six runs is a lot to give up, we tell our pitchers to keep it under five in the postseason and we should be ok, but it is ok because they gave us a chance to win.”

Community came up with a pair of first inning runs, but Forrest was unshaken as they sent 11 batters to the plate in home half of the first inning and plated seven runs to seize control of the game.

“Unionville is scrappy, they are feisty and they come to win and they don’t stop,” Lightfoot said. “So hats off to them for that because we never felt comfortable and we knew we had to keep scoring.”

Forrest had 10 hits in the contest as Macyn Kirby and Briley Burnham combined for seven of the safeties with Kirby going a perfect 4-for-4 at the plate with two doubles, a triple, five RBIs, and two runs scored.

Burnham got on base all four times she batted, singling three times and reaching base on one of five Community errors in the game.

Burnham scored three times, drove home a run, stole a base and made a diving play at second base that saved a run and thwarted a potential comeback attempt by Community in the third inning.

Carli Warner drove in two runs on a first inning base on balls with the bases loaded and belted a solo homerun in the top of the sixth inning.

Christa Warren and Parker Wales had one hit apiece with Warren driving in two runs while Wales had a single, a sacrifice bunt, and a perfectly executed squeeze bunt RBI that finished off the scoring in the sixth inning.

Junior Julie Williams picked up the win in the circle for Forrest, giving up five runs on eight hits in three innings of work.

Freshman Ella Chilton picked up the save with a strong closing effort, giving up just one run on two hits over the final four innings.

“We kind of felt like they started getting on Julie a little bit, who wasn’t hitting her spots as well,” Lightfoot said. “I thought Ella did good coming in and pounding the zone, still losing it on a few batters, but doing a good job.”

The Viqueens gave Forrest fits in two district tournament games last week and they had the early momentum on Wednesday, scoring two first inning runs and it could have been more as they had the bases loaded with two outs only to see it end on a Williams’ inning-ending strikeout.

The back-to-back state champion Lady Rockets were unfazed as they counterpunched in knockout fashion, sending 11 batters to the plate and scoring seven runs in the bottom of the inning.

“I sound like a broken record, we struggle in the first inning finding our groove, we always do,” Lightfoot said. “But after not having a very good first inning, I felt like we came out with our bats which was big.”

Kirby threw a combination of big blows in the frame with a triple to lead off the inning and a two-run rope double to the fence that drove in the last two runs in the offensive outburst.

Warren, Warner, Burnham, and Maggie Daughrity all drove home one run and the Viqueens helped out the cause with two errors and a pair of base on balls.

Daughrity came up huge in the field in the top of the second inning as the Viqueens mounted a rally with runners on second and third and two out when Carlie Blanton blasted a pitch that looked like it was going to drive in both runs, but Daughrity made a spectacular running catch over her head to end the inning and completely take the air out of the Community balloon.

Forrest piled on four runs in the bottom of the third inning with Kirby driving home two more.

Warren knocked in one on a sacrifice fly and Kirby came flying home on a passed ball to make it an 11-2 ballgame.

Community came up with three consecutive hits and a run in the top of the fourth inning off Williams and Lightfoot sent Chilton to the circle with runners on second and third and no outs.

Blanton greeted Chilton with a sacrifice fly RBI and Zoey Dixon made it 11-5 on a fielder’s choice RBI.

After a Chloe West single, Burnham gobbled up a hot shot a second and threw to Warner at first for the third out.

Both teams scored a run in the fifth inning and Chilton worked her way out of a two-on, two-out jam in the top of the sixth inning.

Warner homered to left field with one out in the bottom of the seventh inning before Addison Bunty reached on an error and stole second.

Burnham followed with her third base hit and stole second.

Wales squeezed home Bunty with the final run of the game and Chilton set down the Viqueens 1-2-3 in the top of the seventh to secure the region title.

Forrest (25-10) hosts Westmoreland (19-10) in Friday night’s state sectional elimination round at the Field of Dreams in Chapel Hill with first pitch slated for 5 p.m.

Bunty, the lone Forrest senior on the squad, will graduate after the game Friday night.

“Just being at home in general is big, just playing in front of everybody gives you confidence,” Lightfoot said. “Some of our girls needed some confidence like that confidence booster tonight for Carli which was big, so we are just trying to find a way forward.”

The Lady Rockets have won 13 straight sectional games with their only loss coming via a 5-1 setback to Franklin Road Academy in 2004.

Westmoreland’s last state sectional appearance was at Forrest in 2019 with the Lady Rockets taking a 10-0 win behind a combined three-hit shutout in the circle by Lauren Gillespie and Ashley Milligan and a pair of homeruns by Laura Mealer.