Hunter Bennett has been playing basketball ever since he was big enough to pick up a ball.With plenty of hours in the gym, his life-long dream was being able to play at the next level.He finally made … 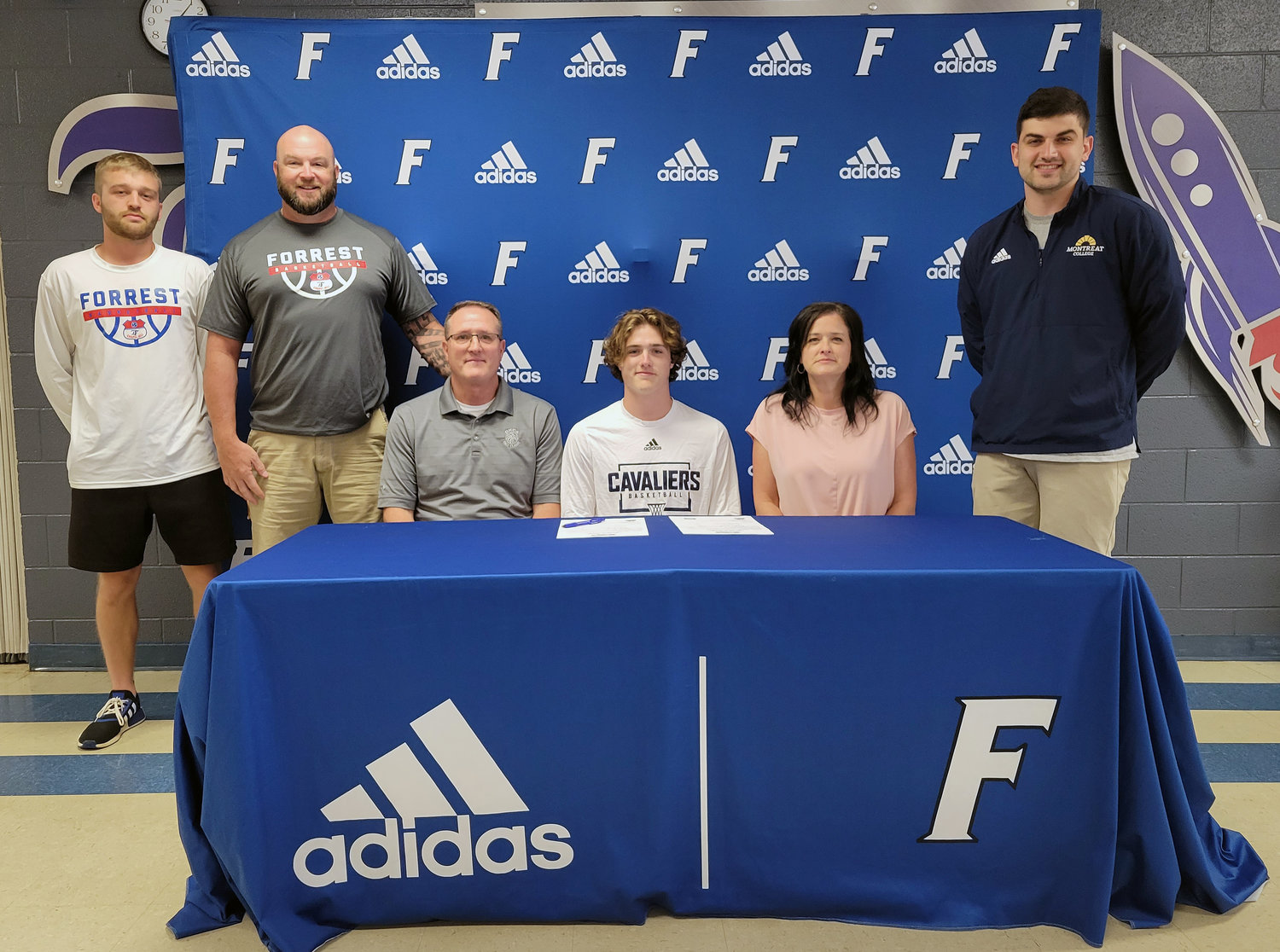 Hunter Bennett signs his letter of intent to play for Montreat College in front of a packed crowd of friends, teammates and coaches.
Tribune Photo by Chris Siers 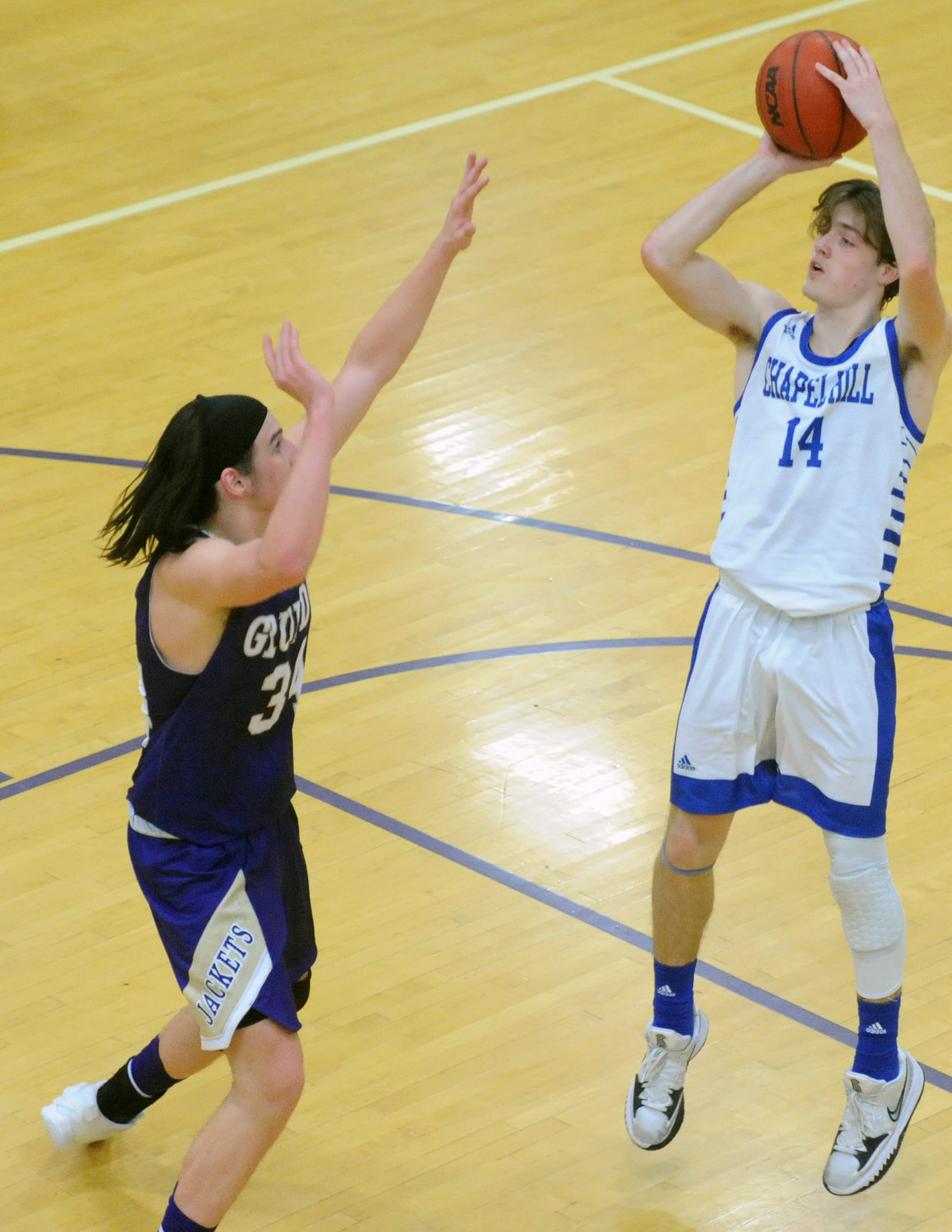 Bennett was a key member of the Rockets’ team last season.
Tribune Photo by Chris Siers
Previous Next
Posted Friday, June 24, 2022 9:00 am
By Chris Siers ~ sports@t-g.com

Hunter Bennett has been playing basketball ever since he was big enough to pick up a ball.
With plenty of hours in the gym, his life-long dream was being able to play at the next level.
He finally made that dream a reality as he signed his letter of intent to continue his basketball career at Montreat College, in Montreat, N.C.
“I’m just super stoked. I’ve been playing basketball since I could pick up a ball. I’ve always wanted to take it to the next level. The fact I can do that now is mind blowing,” Bennett said.
In front of a packed crowd of family, friends, teammates and coaches, Bennett made his commitment official to play for the Cavaliers next season.
While he spent time looking at schools in Tennessee, Louisiana, Florida, it was the connection to his faith and a receptive coaching staff that ultimately helped him make his decision.
“I reached out to a lot of coaches and didn’t get anything. I reached out to them and they got back to me the next day. Actually getting to visit the school and feeling the environment of the school was just amazing. Also being a Christian school really speaks close to my faith,” he said.
Throughout all his years playing, playing at Community last season stands out as one of his favorite memories playing for the Rockets.
“I think playing Community the second time at their place—I scored 26 points and had a double-double against them—I thought this was the beginning of something great,” he said.
In addition to the game against the Vikings, Bennett said the team environment were among some of his favorite memories.
“The team environment this year was amazing. Coming into the season, we’re all working hard, but we can all cut loose and hang out outside of the locker room,” he said.
Bennett was a key component in the Rocket lineup that forged its way to the region tournament.
Bennett is the second member of the 2021-2022 Rocket basketball team to sign sign a letter of intent, joining teammate Deason Jones, who signed with Bethel University.
“Hunter’s coached reached out to me for some film. I was just a facilitator for those two guys,” Forrest coach Shane Chapman said.
“It’s a huge boost for our program knowing we have kids that at least have the opportunity to play at the next level. Hopefully that will spur some of these younger kids into working so when these guys come back and talk to kids, they can give them first-hand experience what it’s like at the next level.”
Chapman also feels that Bennett can be an immediate impact for the Cavaliers.
“I look for him to be a three-four guy. We talked to their coach about playing in the mid-range, and that’s what he really wanted to see in some film on him,” he said.
“What Hunter did really well was get the ball in the high post, dump it low, or if he was playing in the short corner, getting it to the high post or attacking and getting to the rim. I feel like he’s got that kind of physicality about him to finish at the rim, but he also has enough touch to finish short jumpers, too.”
For now, the work shifts to summer preparation and conditioning for his freshman season with Montreat.
“It’s going to be a lot of weight lifting and lot of shooting and finishing. I’ve also got a coach that coaches D-I prospects I’m going to and working with him over the summer four days a week.” Bennett said.
Bennett plans to pursue a degree in education.
“I want to be a teacher and go into secondary education and teach freshman math,” he said.
Montreat is located in Western North Carolina, nestled in the Appalachian Mountains just 19 miles from Asheville, N.C.
The Cavaliers are a NAIA school that competes in the Appalachian Athletic Conference.
Montreat finished second in the AAC tournament last season and qualified for the NAIA national tournament.