CHAPEL HILL — The Forrest Rockets have gotten pretty familiar with the Community Vikings.Their most recent meeting, prior to Wednesday’s Region 4-AA title game, the Rockets had to utilize …

The Forrest Rockets pose with their new hardware after defeating Community for a sixth time this season, which earned them the Region 4-AA title.
Tribune Photo by Rickey Clardy 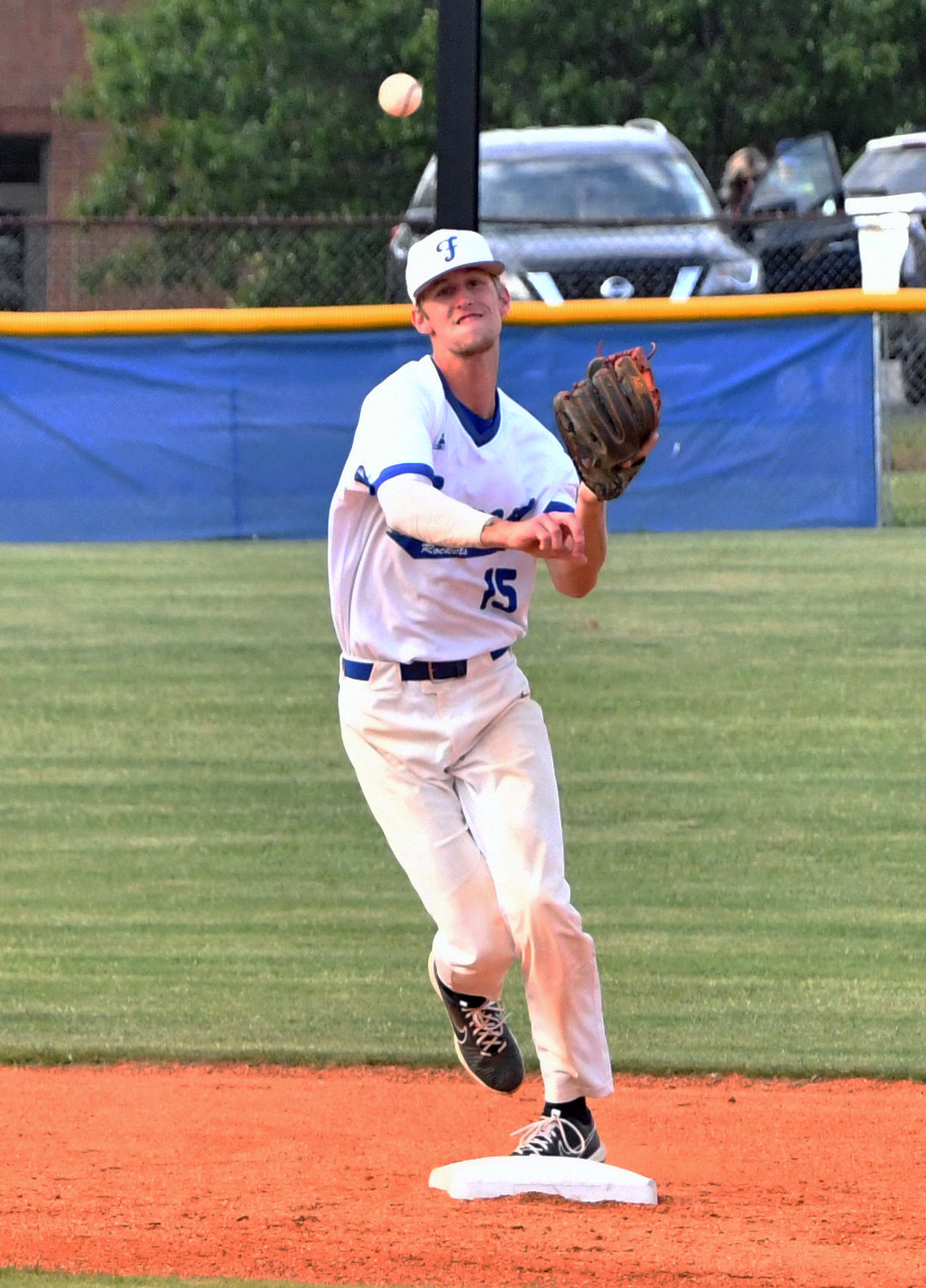 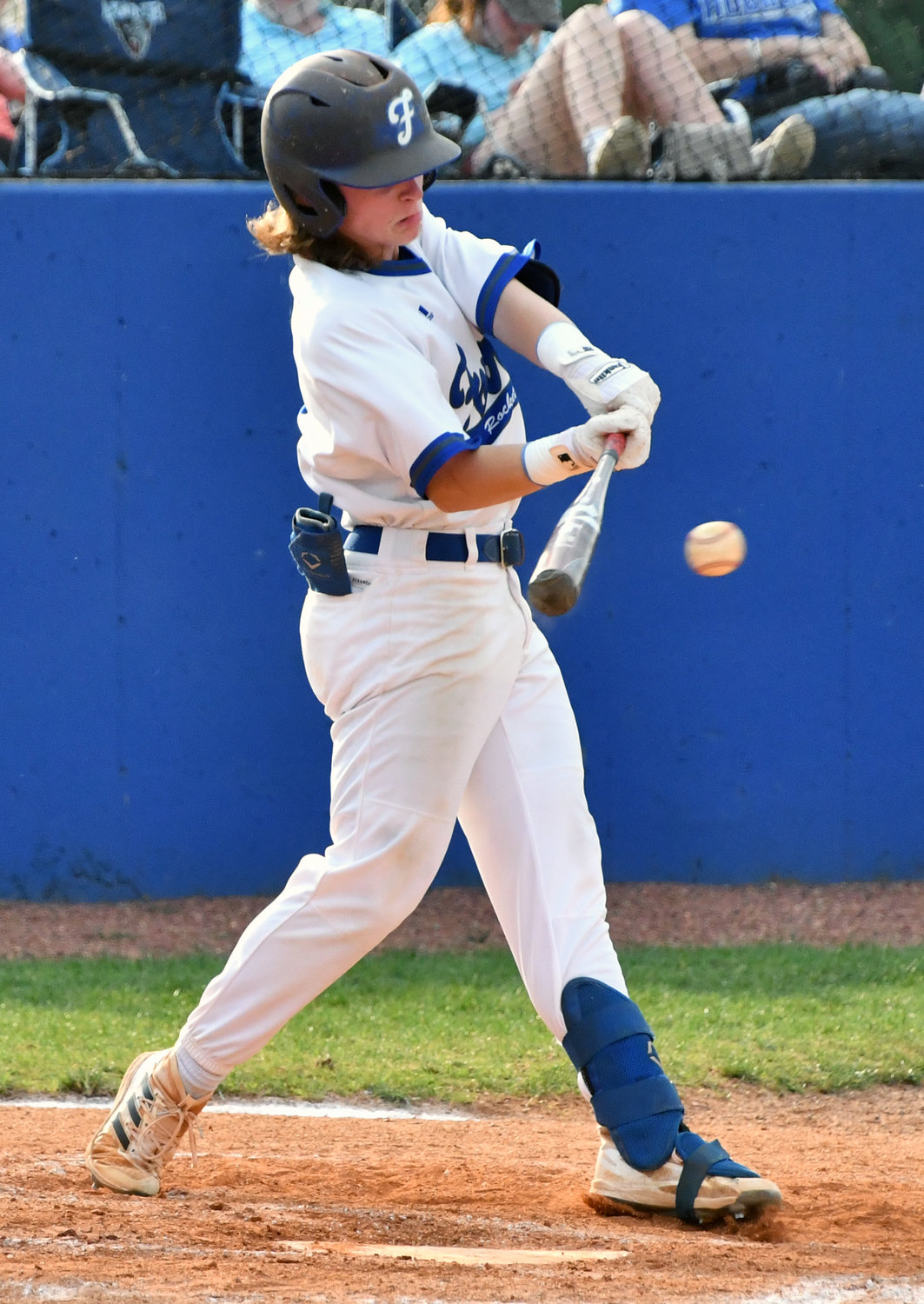 Carter Walk connects on a base hit.
Tribune Photo by Rickey Clardy
Previous Next
Posted Thursday, May 19, 2022 4:55 pm
By Chris Siers ~ sports@t-g.com

CHAPEL HILL — The Forrest Rockets have gotten pretty familiar with the Community Vikings.
Their most recent meeting, prior to Wednesday’s Region 4-AA title game, the Rockets had to utilize a seventh-inning rally to down the Vikings for the District 7-AA championship.
While it wasn’t a seventh-inning rally on Wednesday, the Rockets still found themselves down early against Community, but orchestrated a massive bounce back in the 12-4 blowout win over Community.
“In the five times, previous that we’ve played them, all five games, we went down whether it was one run, two runs or three runs. It was the same story, different game,” Forrest coach Andy Burkett said.
“I was really proud of our guys and the way they battled back. We had some really great, aggressive at-bats.”
Community’s Mason Russell slugged a three-run blast to put the Vikings up in the first inning.
The Rockets got a run back in the bottom of the inning on an error, but it was a seven-run second inning that truly blew the game open.
Forrest connected on seven base hits and three walks to take an 8-3 lead by the end of the second inning.
Forrest surrendered one more run to the Vikings in the top of the third inning on a RBI base hit, but went on to add four more runs to preserve the eight-run lead.
Brennan Mealer had a stellar game, going 4-for-4 with two RBIs, while Braden Bowyer connected on a pair of base hits and knocked in three runs.
Camden Vaughn, Riley Durbin, Kason Fuller and Andrew Timmons all had two-hit games against Community.
As a team, the Rockets hammered the Viking pitching staff for 17 hits.
“It was one of those things where I was happy with hour our guys competed and kept themselves in the ballgame,” Burkett said.
Preston Gentry took the win on the mound and pitched five innings, giving up four runs on eight hits, while striking out three.
Ashton Grubbs pitched the final two innings in relief and didn’t allow a base hit, but struck out two.
The Rockets are now winners of their previous 14 games and by winning Wednesday’s region title, earn a home Class AA sectional.
Forrest last won a state sectional in 2019 as part of the Rockets’ march to the Class AA state championship game.
“That sectional game, that’s a game where we’ve been it before. It’s been a little while since we’ve been in one. You definitely want to be able to play that game at home. You want to be able to take your chances here at home as best we possibly can,” Burkett said.
York Institute enters Friday’s Class AA sectional game after falling to Watertown in the Region 3-AA championship.
First pitch is set for 2 p.m. in Chapel Hill.