The Forrest Rockets pose with their newly acquired hardware after defeating Community in the district finals on Tuesday.
Tribune Photo by Chris Siers 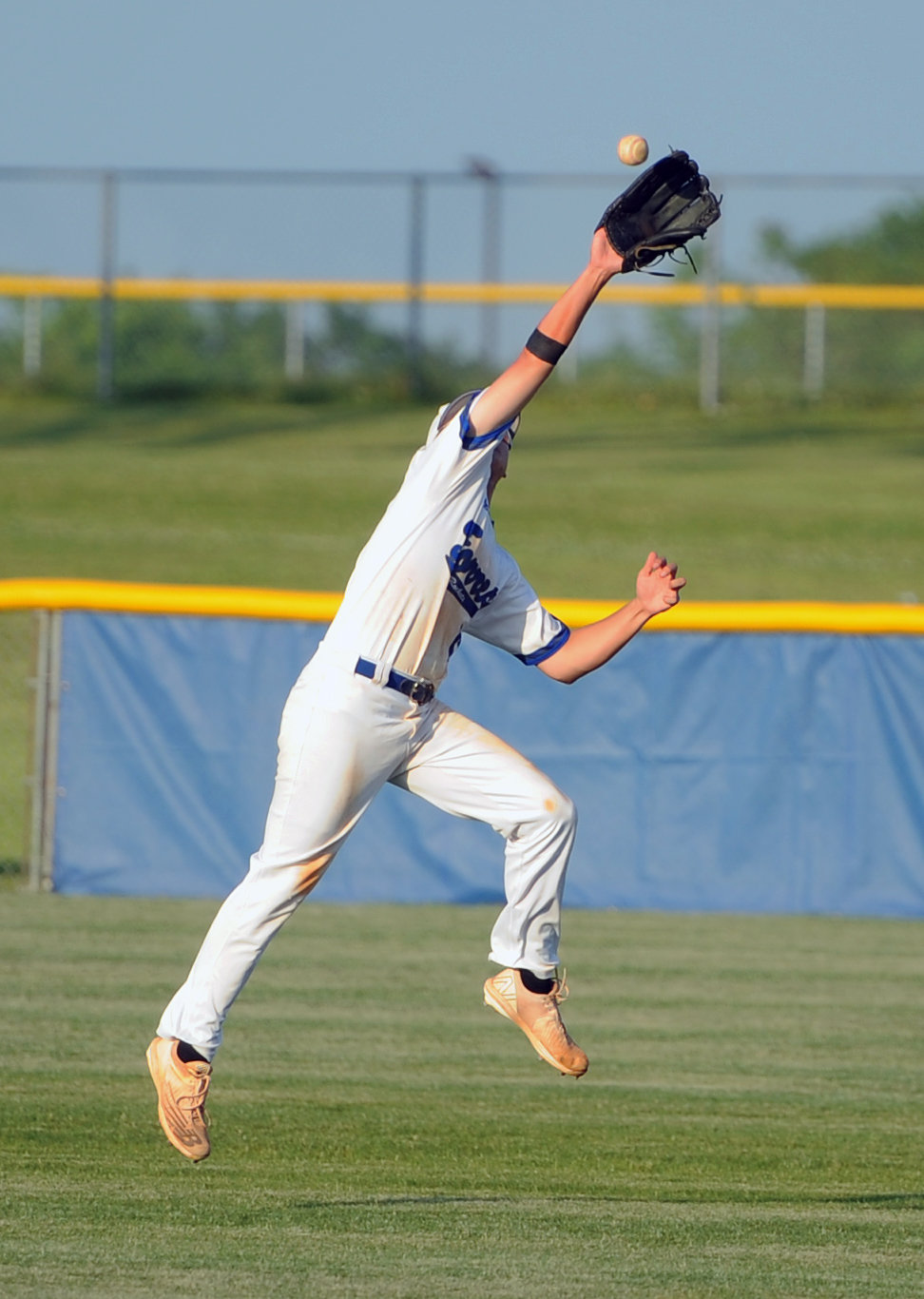 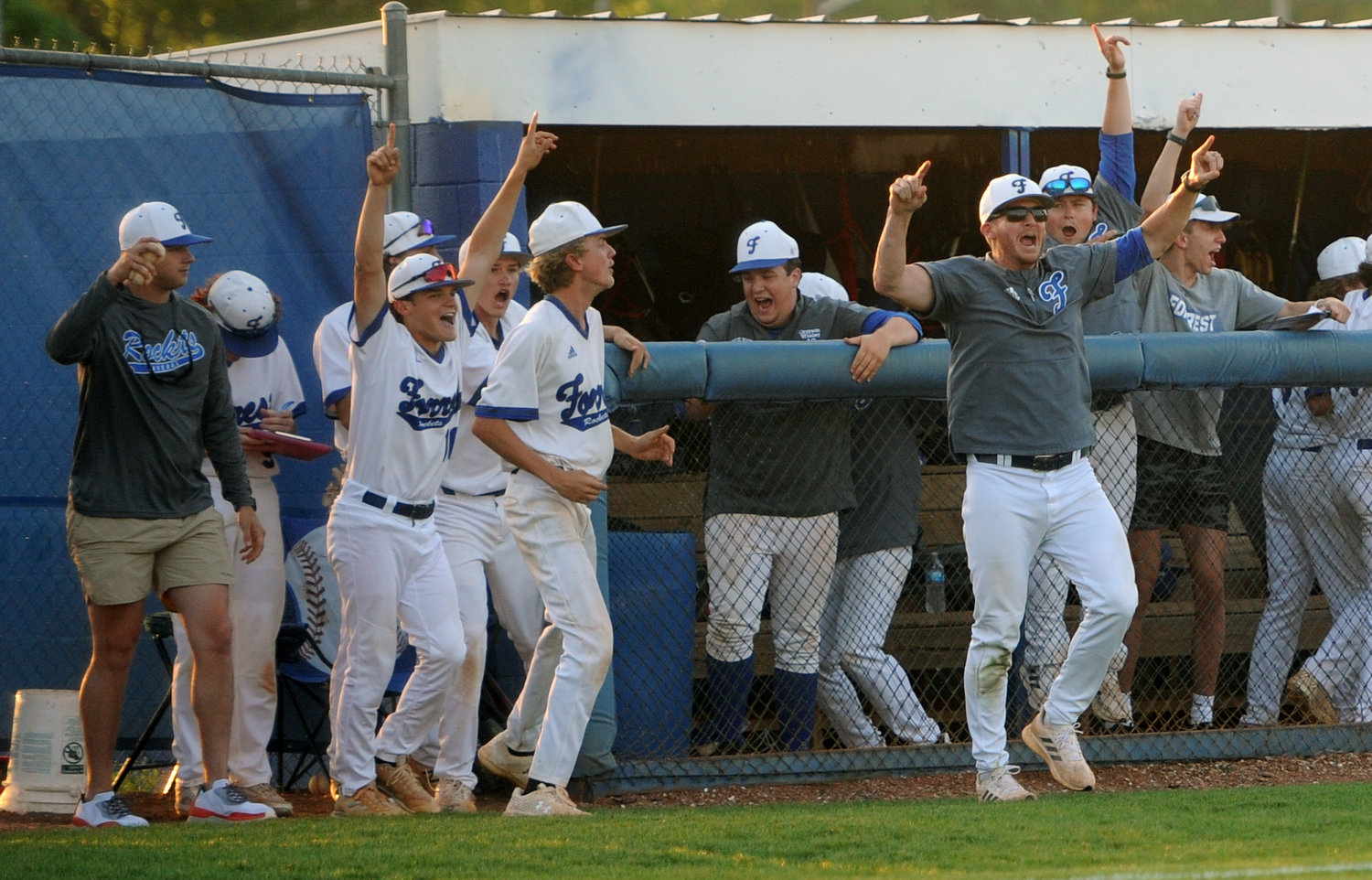 The Rocket dugout erupts after recording the final out and securing the district championship.
Tribune Photo by Chris Siers 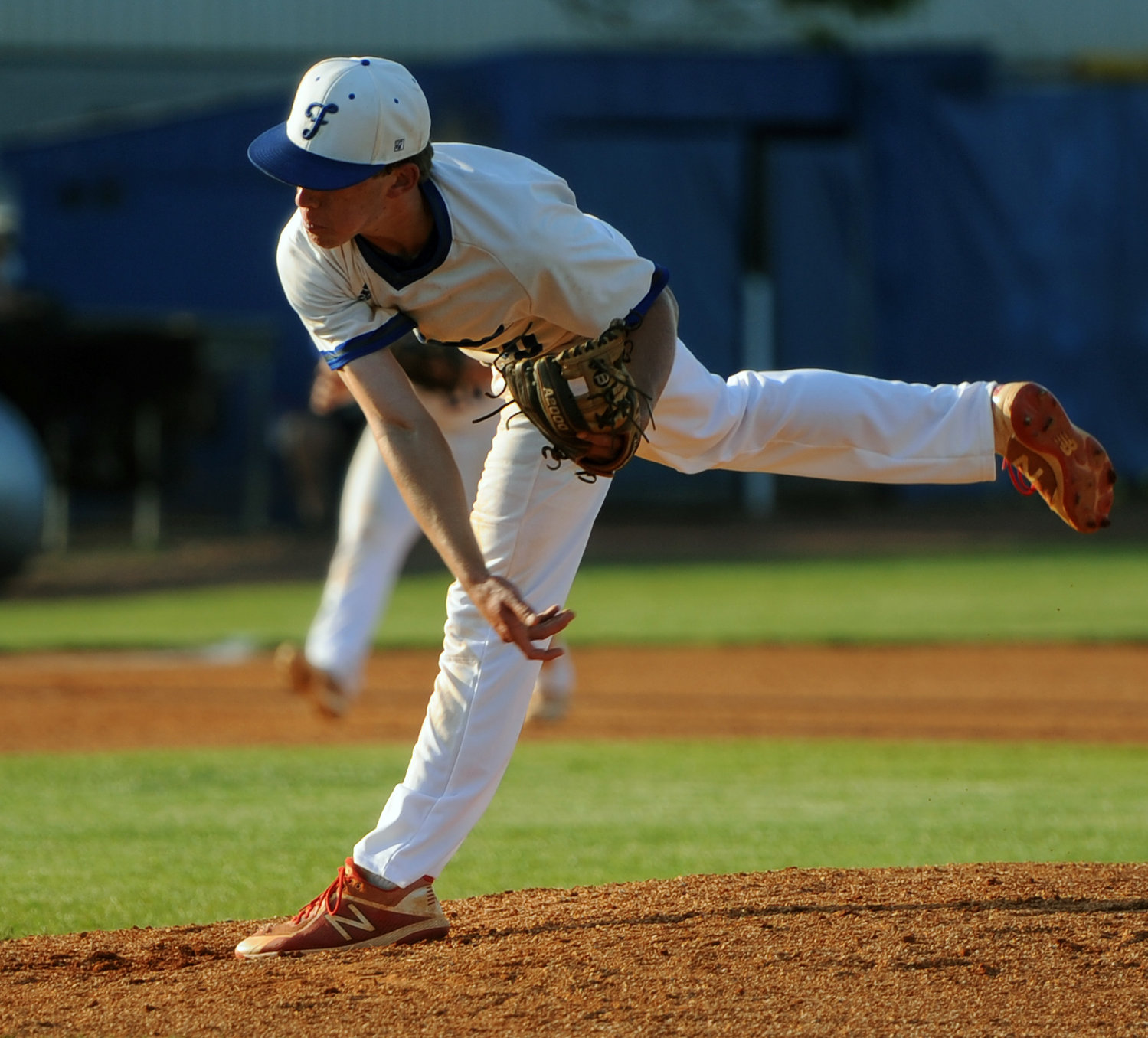 Preston Gentry pitched a key 2 2/3 innings in relief for the Rockets.
Tribune Photo by Chris Siers
Previous Next
Posted Tuesday, May 10, 2022 10:53 pm
By Chris Siers ~ sports@t-g.com

CHAPEL HILL — Forrest head coach Andy Burkett knows it’s tough beating a team three times in a single season.
But four or five? It’s not just tough, it’s downright unheard of.
That’s just what his ball club did on Tuesday night, beating Community for a fifth time this season to claim the District 7-AA championship in a 9-8 come-from-behind victory.
“We were able to get them three times in the regular season and we caught them in the semifinals, they played us to an awesome ballgame,” Burkett said.
“Playing them for a fifth time, I’ve always heard it’s tough to beat a team three times, much less four and much less five. You have to give them (Community) a lot of credit. They faced some adversity and beat Cascade yesterday, they gave us absolutely everything we could handle.”
The Rockets were hampered by errors throughout the game and at one point in the fourth inning, trailed 7-2, with the Vikings in cruise control.
Community was aggressive on the base paths early and scored the game’s first run in the bottom of the first on a sac-fly RBI.
Forrest answered on a RBI single by Kason Fuller in the bottom of the inning.
Both teams plated a single run in the second inning, with the Rockets once again plating the equalizer on a RBI single to center field, tying the game at two.
After an evenly-played first two innings, Community went to work in the top of the third and built a 5-2 lead on two RBI singles and a RBI double.
But in the third, the Rockets were sat down in order by Community starter Mason Russell.
Things continued to spiral in favor of the Vikings in the fourth following a Rocket error in the infield and a hit batter after a sac-bunt, put runners on the corners with one out, prompting the Rockets to turn to Preston Gentry on the mound.
Forrest committed two more errors in the inning and Community plated two more runs, bumping the score to 7-2 after the fourth.
But Gentry delivered a near-flawless fifth inning after surrendering a leadoff single and was able to record three-straight outs to prevent another scoring inning for Community.
Riding off the moment, Camden Vaughn led off the bottom of the fifth with a double to deep left field and then scored on a Viking error.
The Rockets then got a huge momentum boost off the bat of Brennan Mealer, who slugged a two-run blast over the right field fence, pulling the Rockets within two.
Gentry followed the momentum off Mealer’s shot and sat the Vikings down in order in the top of the sixth, and the Rockets picked up where they left off in the fifth.
Carter Walk was hit by a pitch to lead off the inning and back-to-back bunt singles by Gentry and Andrew Timmons loaded the bases, with no outs, bringing Vaughn to the plate.
Vaughn was hit by a pitch, which scored the first run of the inning and Riley Durbin hit a sac-fly to right, that tied the game at seven apiece.
Fuller followed and ripped a ground ball single to left, scoring another Rocket run.
Rather than pitch to Mealer, the Vikings called for an intentional walk, which loaded the bases.
A stellar at-bat by Braden Bowyer drew a bases-loaded walk, which scored a ninth Rocket run.
Hoping to slam the door shut on the Vikings, Mealer took over on the mound, but struggled and loaded the bases after back-to-back walks and a hit batter.
Burkett then turned to Bowyer to close out the Vikings and despite giving up a run on a RBI fielder’s choice, he did just that and the Rockets were able to claim the 7-AA tournament championship title.
“I think it’s a testament to our guys. We’re not out in any single ball game. We played an ugly ball game. We had five errors—we haven’t made five errors in a week all season,” Burkett said.
Forrest was led by Vaughn and Fuller at the plate, both of whom connected on two hits.
Mealer’s two-run blast was the biggest hit of the night for either team.
“Brennan is a table setter for us. He drives in a majority of our runs. He leads the team in RBIs and he’s trying to figure out the best way to be able to put us in a position to win the ball game. When that happened, it got us a shot in the arm and gave us the momentum that we needed to be able to get it done,” Burkett said.
Ashton Grubbs got the start for the Rockets and went 3 1/3 innings. He gave up seven runs on seven hits, but only two of which were earned.
Gentry took over in the fourth and pitched 2 2/3 innings, giving up just one hit.
Bower slammed the door shut on the Vikings and pitched a flawless seventh.
Forrest also racked up the season awards, with Fuller, Moses, Bowyer and Vaughn each being named to the All-District team.
Mealer earned District 7-AA Pitcher of the Year honors, while Durbin was named District MVP.
Burkett was also named Coach of the Year.
Forrest has dominated the District 7-AA slate all season and the No. 1 Rockets continued that theme on Tuesday.
Now with the district title in hand, the Rockets get the rest of the week off before beginning Region 4-AA tournament next week.
“We’ll get a chance to clean up some things defensively. Hats off to our pitching staff trying to figure out a way to get things done even when the going got tough,” Burkett said.
“There’s been a lot of baseball played in the last week and a half or so. We’ll get back after it on Thursday, clean up some things defensively, try to figure out our pitching rotation for next week and be ready to give the other district all they can handle.”
Forrest will host the No. 2 seed from the District 8-AA tournament on Monday evening.