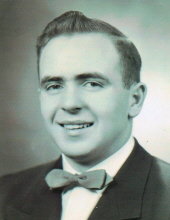 Wayne “Poonie” Hardison Petty, born Sept. 6, 1936, passed away on his 85th birthday, Sept. 6, 2021, at NHC Oakwood, Lewisburg, TN. He was the third child born to parents the late Hatton and Bessie Petty at their home on Snake Creek Road in the Possum Trot community of Marshall County. In addition to his parents, he is preceded in death by his older brother, James Petty (Margaret); sister, Ruth Moore (Edward); and son-in-law, Ray Locke.

After the family moved to Verona, Wayne sneaked away to fish at the “Blue Hole” as often as possible. He graduated from Marshall County High School in 1954 where he lettered all 4 years in football. He had the opportunity to play football at MTSU but had to miss Day 2 of the try-outs to bail hay on the farm. In 2005, he retired from the Lewisburg Fire Department with 19 years of service and was able to thoroughly enjoy his two passions – his grandchildren and fishing. He was a member of First Baptist Church, Lewisburg, TN.

Pallbearers include Miles Lawrie, Terry Martin, Preston O’Neal, IV, Ethan Petty, Jerry Petty, Dr. Martin E. Poarch. Visitation with the family will be on Wednesday, Sept. 8, 2021, at Bills-McGaugh & Hamilton Funeral Home from 11 a.m. to 2 p.m. Funeral service to start at 2 p.m. with burial to follow at Lone Oak Cemetery. The family suggest that those attending follow CDC guidelines on social distancing and face masks are encouraged. In lieu of flowers, donations can be made to the “Building Fund” at First Baptist Church, 323 Second Ave N, Lewisburg, TN, 37091, or the Tennessee Wildlife Resources Agency, 5000 Linbar Drive Ste 275, Nashville, TN 37211, twrf.net in his memory.

Bills-McGaugh & Hamilton Funeral Home is honored to assist the Petty family with arrangements. Condolences may be offered online at www.billsmcgaugh.com.