Special Olympians return to competition for 1st time in 3 years

LEWISBURG — When the COVID-19 outbreak began in the spring of 2020, sports were put on hold for essentially all of the world.While the vast majority of the sports world has relatively returned …

Special Olympians return to competition for 1st time in 3 years 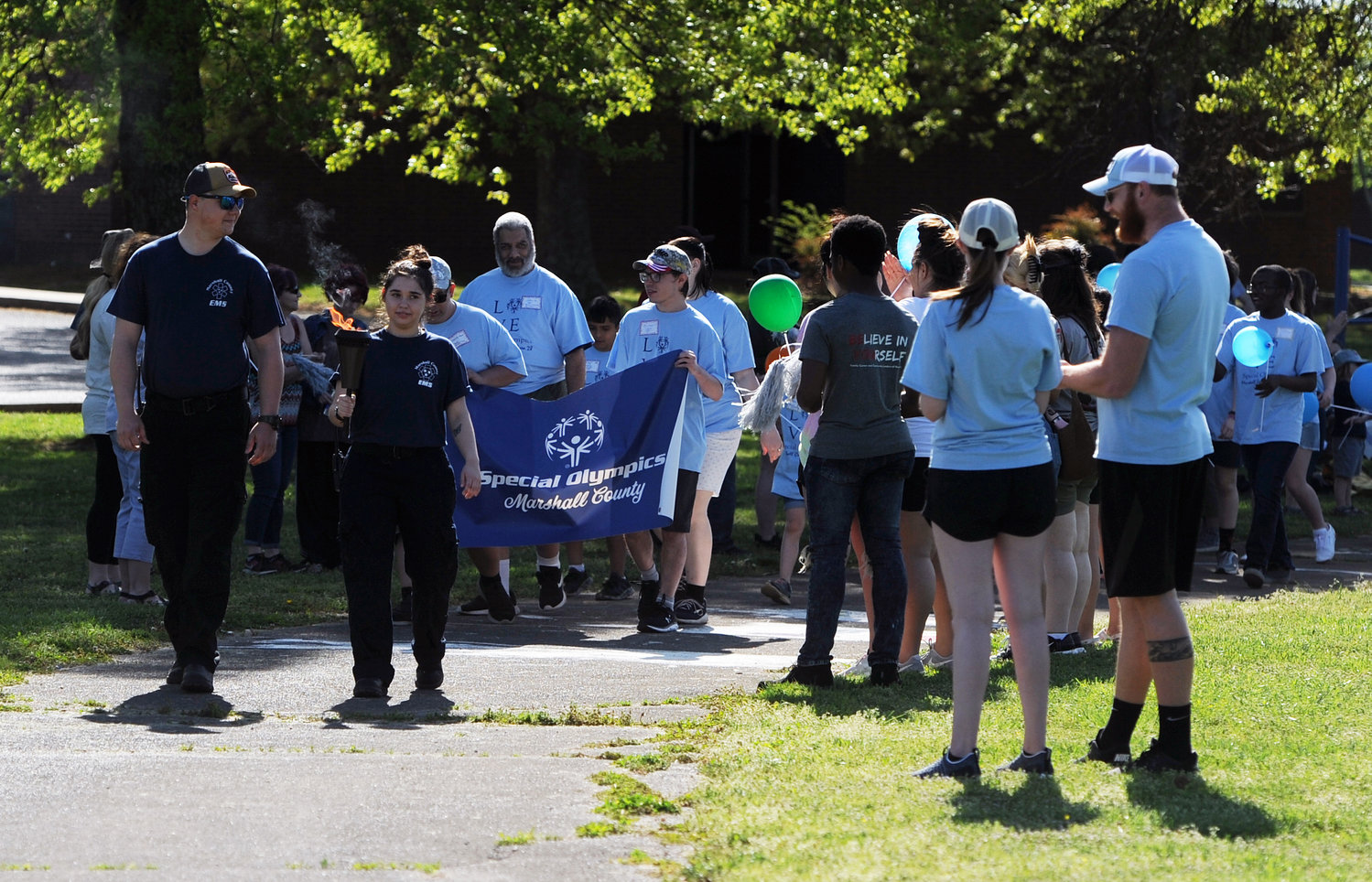 Athletes who participated in the Special Olympics of Marshall County on Saturday make their way, led by the Olympic flame, in the parade of contestants.
Tribune Photo by Chris Siers 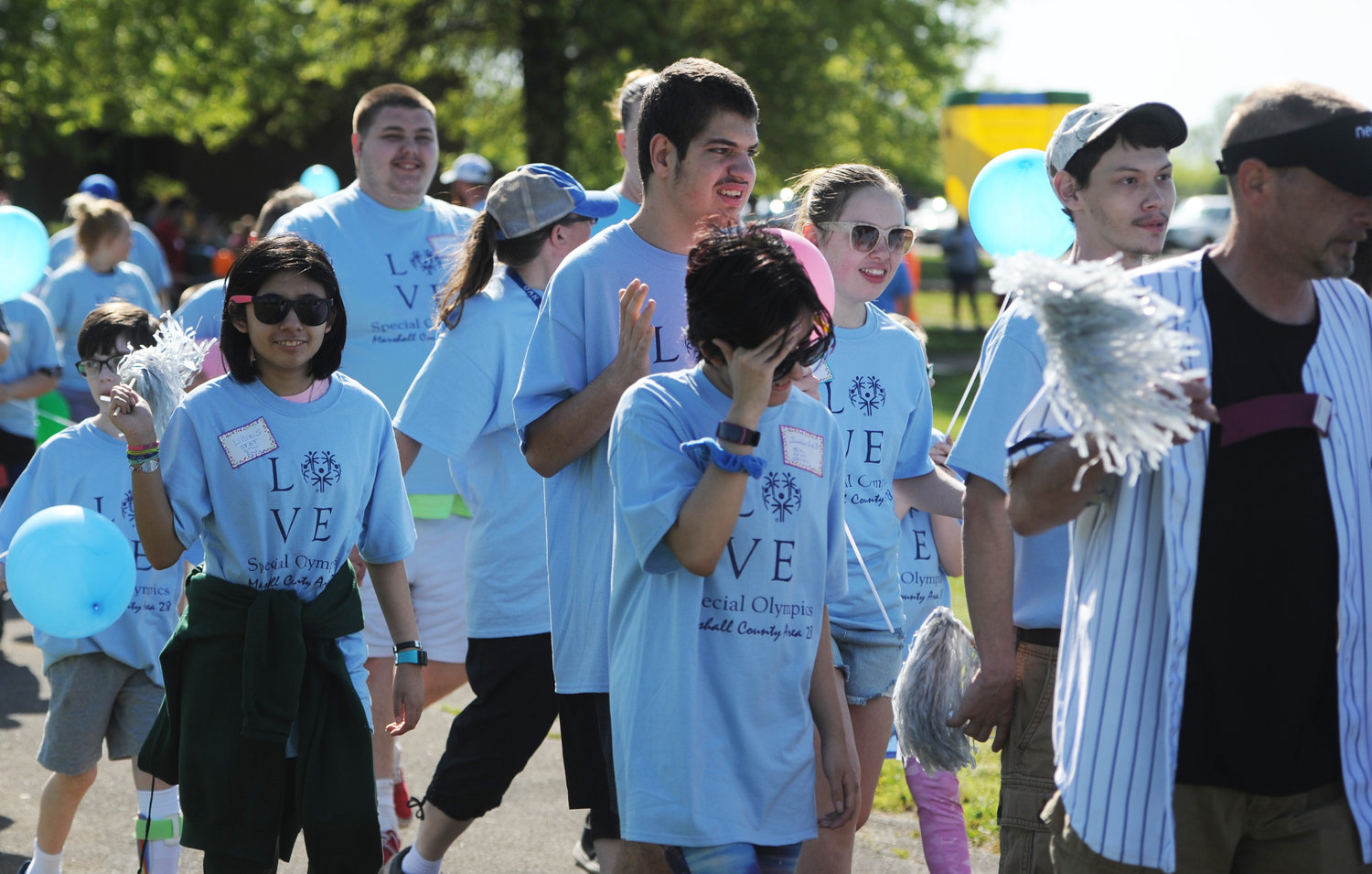 Participants in the Special Olympics wave at spectators as they make their way through the parade.
Tribune Photo by Chris Siers 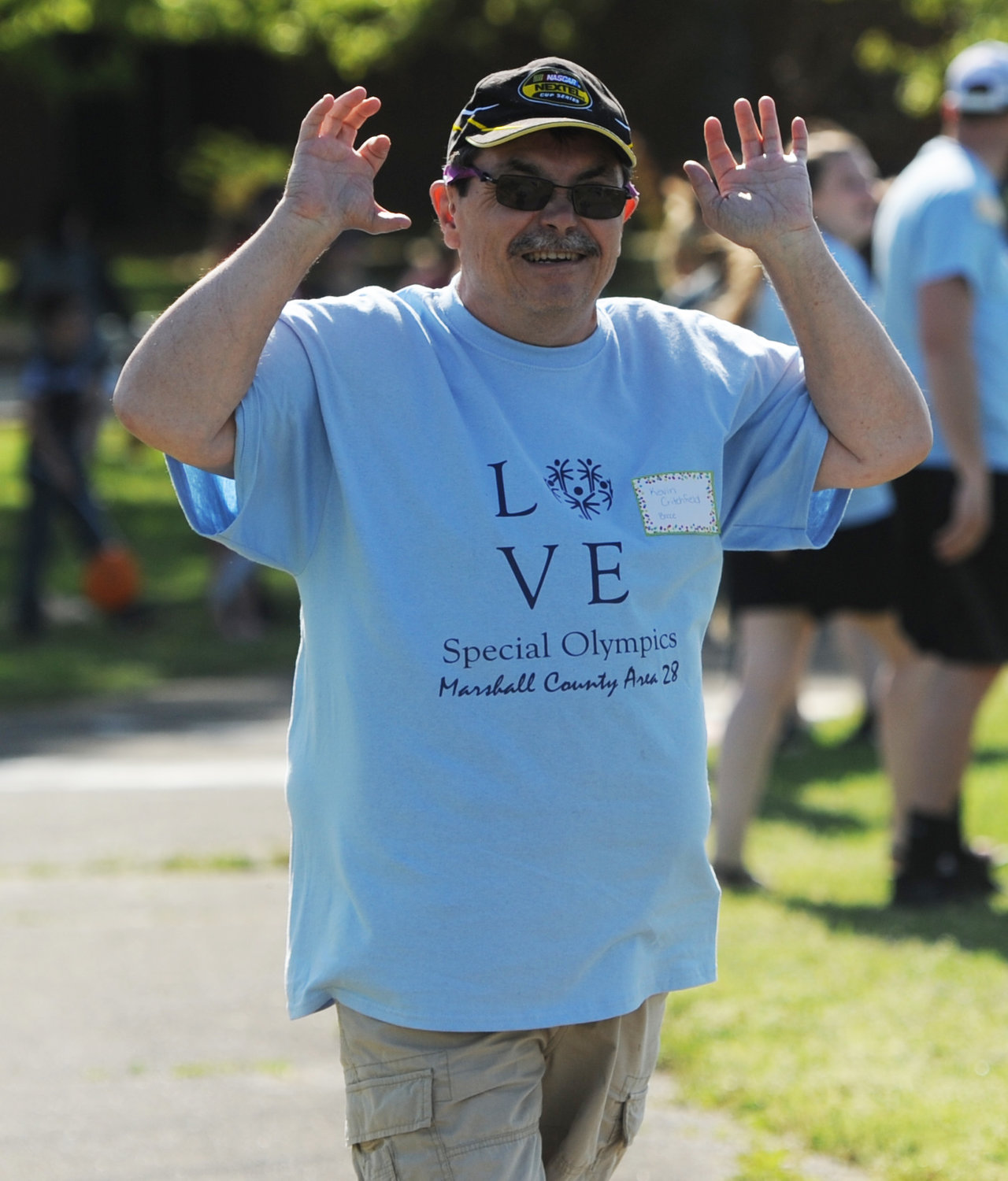 Excitement was in the air as the first Special Olympics in three years was held on Saturday at West Hills Elementary.
Tribune Photo by Chris Siers 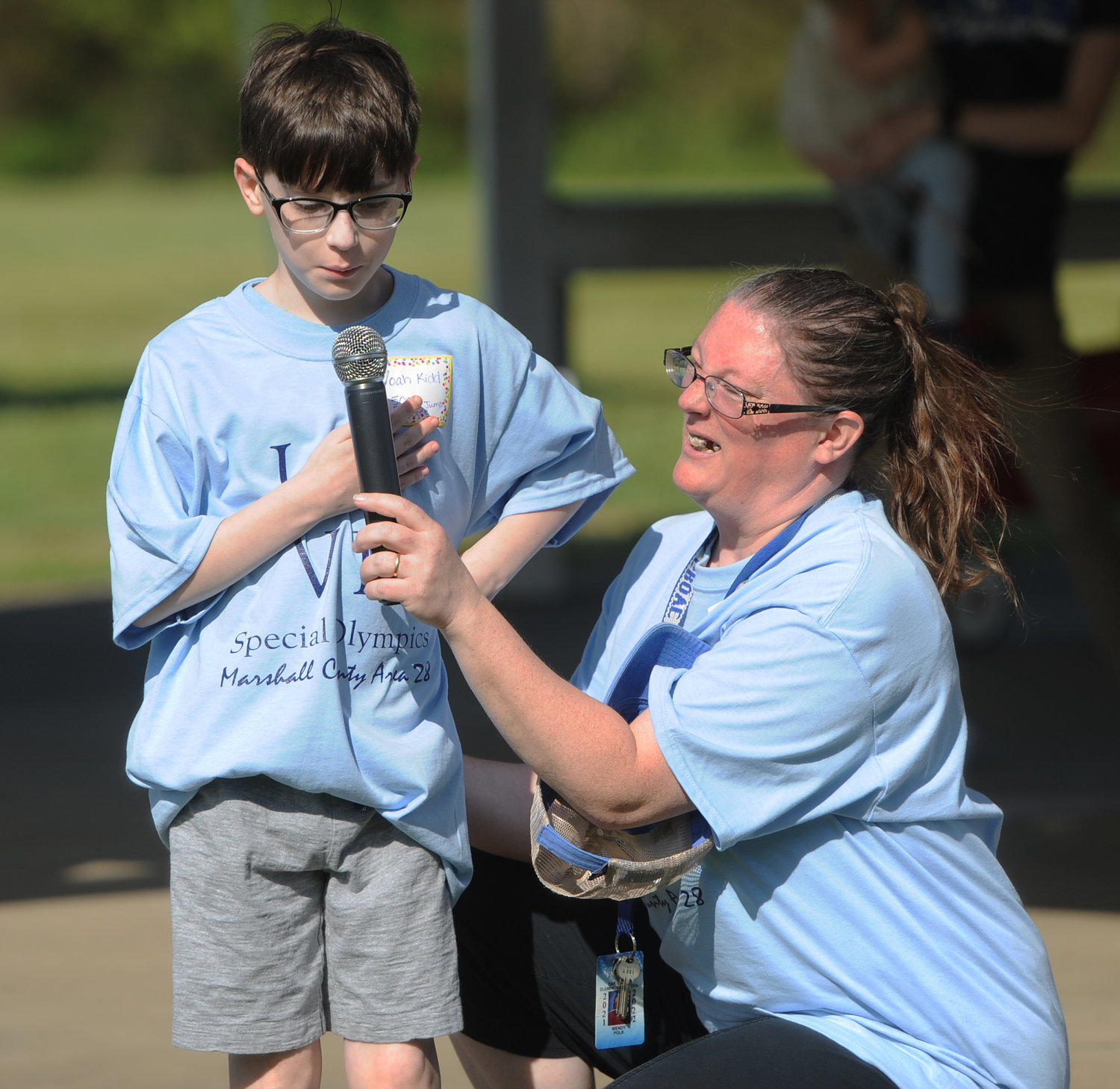 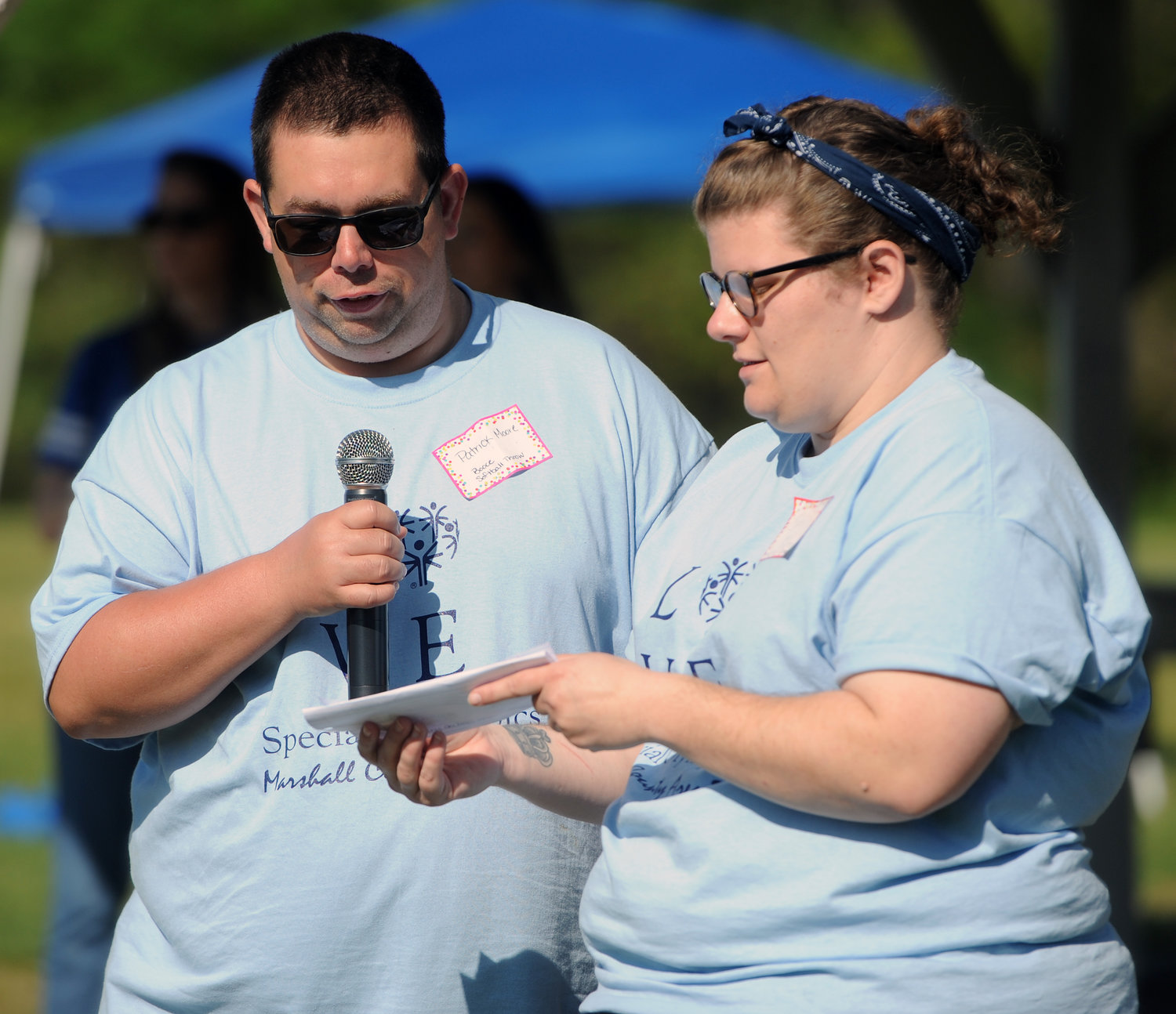 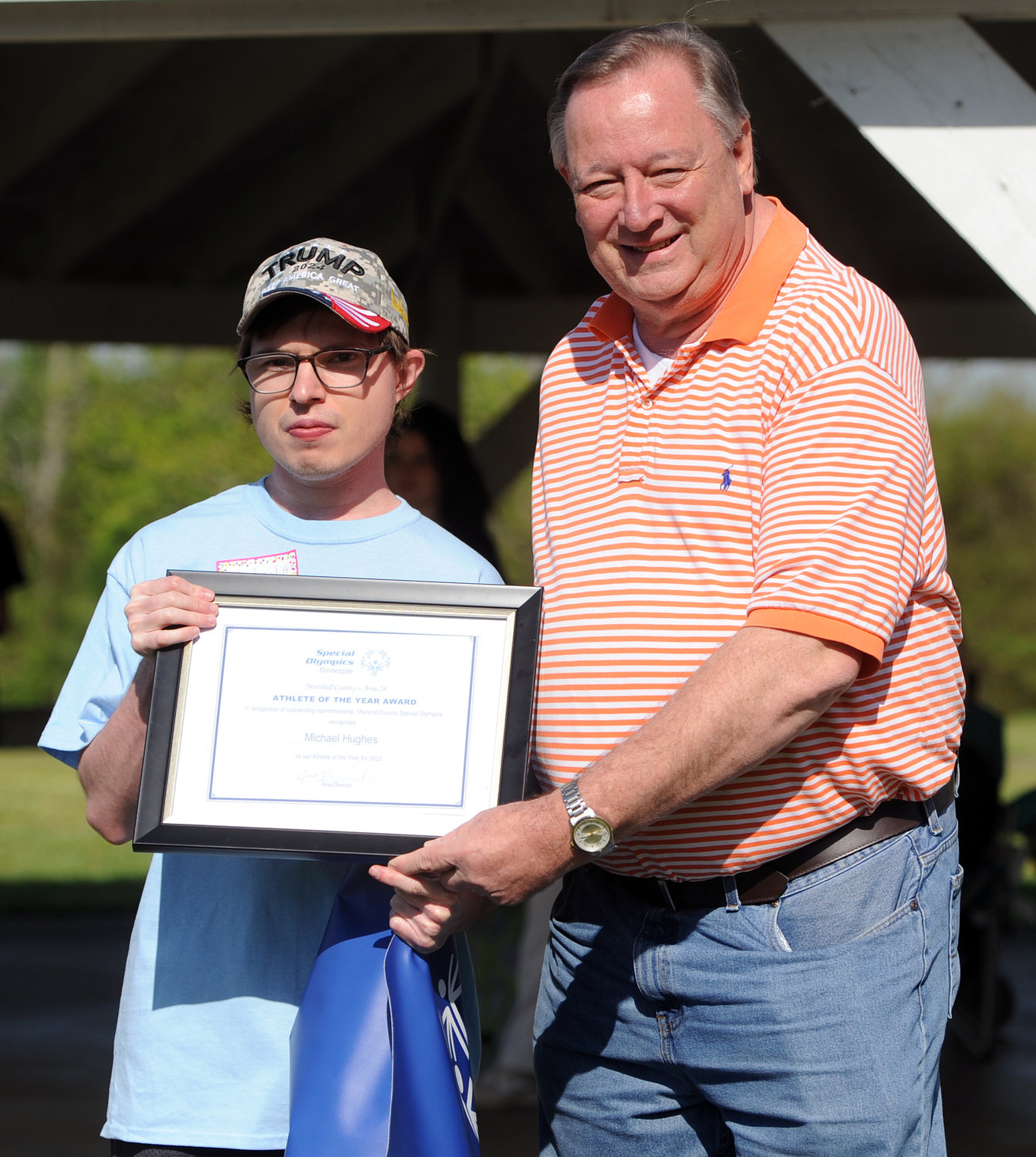 Marshall County Mayor Mike Keny presents Michael Hughes with a special award, honoring him as the Athlete of the Year.
Tribune Photo by Chris Siers 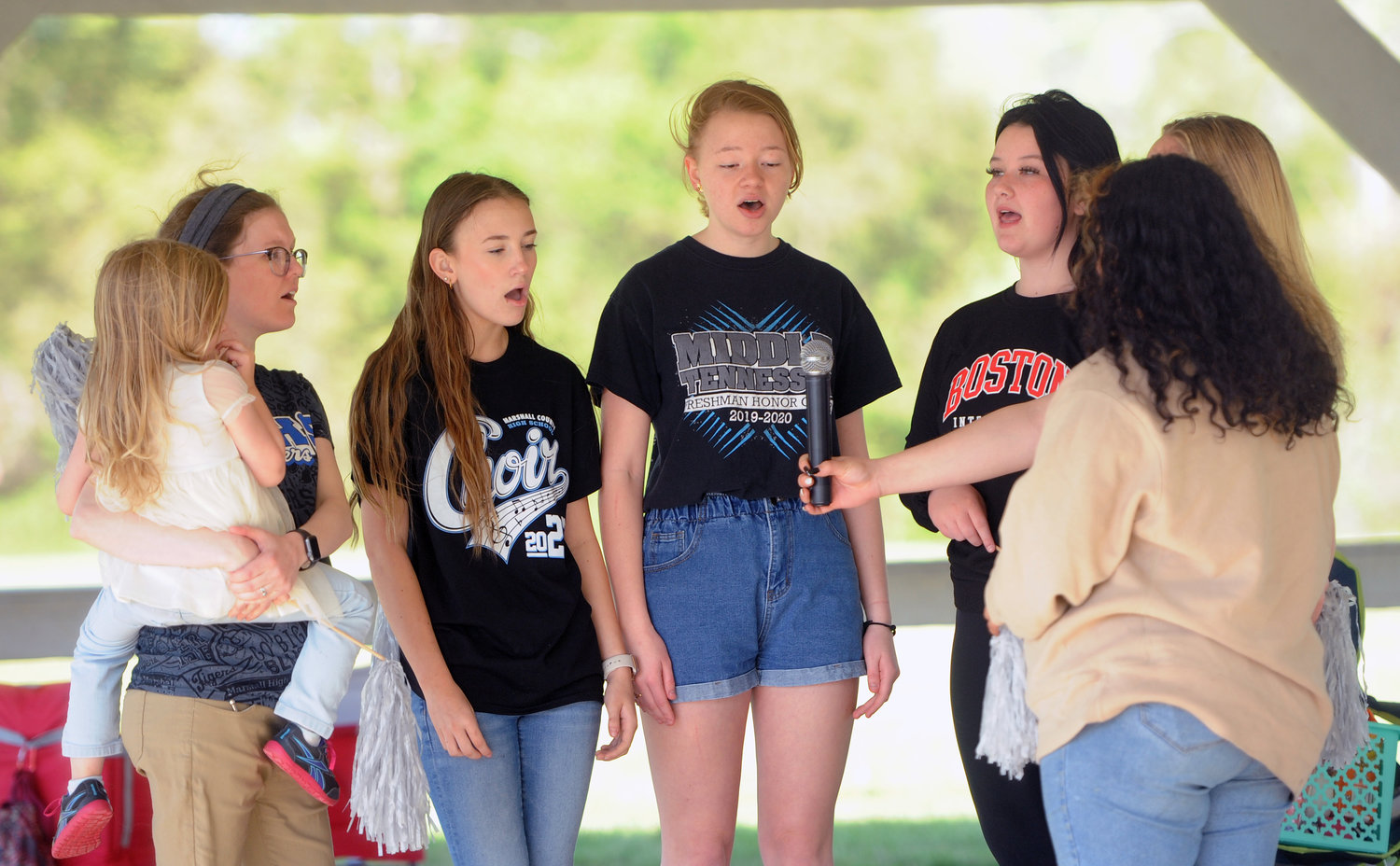 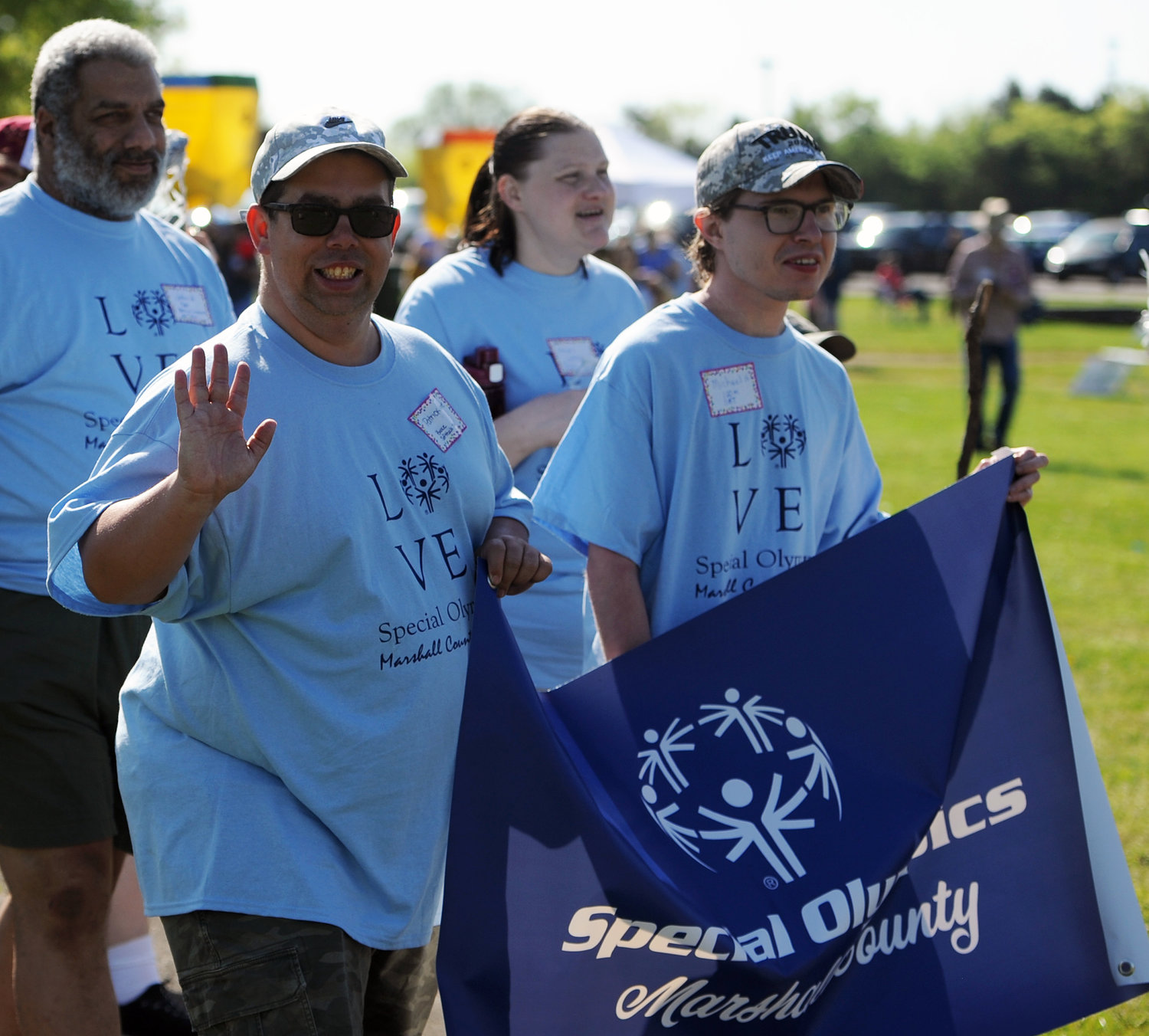 Patrick Moore waves at supporters as he helps lead the parade of athletes to open Saturday’s Olympic Games.
Tribune Photo by Chris Siers
Previous Next
Posted Wednesday, April 27, 2022 8:25 am
By Chris Siers ~ sports@t-g.com

LEWISBURG — When the COVID-19 outbreak began in the spring of 2020, sports were put on hold for essentially all of the world.
While the vast majority of the sports world has relatively returned to normal, only recently have Special Olympics athletes been able to return to competition.
For the first time in three years, the Marshall County Special Olympic Games were held at Westhills Elementary School.
Saturday’s Special Olympics welcomed athletes ranging in age from 8 to 99, who competed in events including softball throw, javelin throw and bocce.
Athletes also competed in track events including the 50-meter dash, 100-meter dash, 200-meter dash and both standing and running long jumps.
First-year area director Sara Poarch, like so many of the volunteers and athletes, was excited to welcome the Games back following the three-year hiatus.
“We were most excited just to see the athletes again. Some of the athletes, coaches and volunteers have been with the organization for 10-to-20-plus years. We consider each other friends and family, so it was incredibly hard to not be able to see each other and compete,” Poarch said.
In addition to dealing with the sheer absence of games, the organizers and volunteers had to consider many of the participants and volunteers have health issues, which puts them in the high-risk category.
While the 2022 Games saw a slight downtick in participants from the 2019 Games, the turnout was still a positive as athletes finally returned to competition.
“We had 30 athletes at this year's Games, which is less than in 2019, but we were expecting that. We moved the event to a Saturday instead of the Friday it had been on for the last 10 years or so in hopes that more families and volunteers could attend the event, which they did,” Poarch said.
“We also know that some of our athletes have compromised immune systems and are still exercising caution even now. I hope that next year we progress even further so that all our athletes can be there safely with us and their families. We want to add more events and grow as a delegation so that we can offer even more to our Special Olympics community”
Saturday morning’s Games began with a parade of participants being welcomed back, followed by the opening ceremonies, which included the Special Olympics motto administered by Patrick Moore, the Pledge of Allegiance, which was led by Noah Kidd and the presentation of Athlete of the Year by Marshall County Mayor Mike Keny.
Michael Hughes was named as the Athlete of the Year, which is given to an athlete that embodies sportsmanship and the Special Olympics motto, “Let me win, but if I cannot win, let me be brave in the attempt.”
Hughes has participated in the Special Olympics for the better part of 19 years and has competed in golf, track and field, volleyball and basketball.
“The pandemic has been incredibly hard for us all, but Michael never let us forget that there was hope and that he couldn’t wait for the games to begin again. Each new season, he would ask for updates on each sport and ask how he could help. He truly embodies the spirit of Special Olympics, which is why not only will he be receiving the Athlete of the Year award, but for the next year, he will also be joining our Board of Directors to advise us on the athletes’ perspective on our programming,” Poarch said.
Following the award presentation, Mayor Keny officially declared the Games open and athletes were able to return to competition after an extremely long three-year wait.
Saturday’s top competitors earned their trip to the state Games, which will be held at David Lipscomb University in May.
Twelve track athletes and eight bocce players will join six volleyball players, who will represent Marshall County next month at Lipscomb.
The Marshall County Olympians will join thousands from across the state in competition and with the coaching and support staff, Poarch has a feeling there will be several medals returning with the athletes back to Lewisburg.
“We are looking at thousands of athletes from Memphis to Nashville to Knoxville all competing. Our athletes are no slouches and normally rack up an impressive medal count for Marshall County, and I have every confidence they will do that again this year,” she said.
In addition to the time put in by the volunteers to help organize and run the events surrounding the Special Olympics, Apex Bank organized a fundraiser drive titled “Change for Special Olympics,” which encouraged donations to be made from area schools, including Chapel Hill Elementary, Delk Henson and Forrest High School.
In the first year in return to competition, $1,734 was raised to support Special Olympics of Marshall County.
With the Lewisburg Olympic Games in the books, qualifying athletes now turn their attention to the state Games, which will be held at Lipscomb on May 20 and 21.