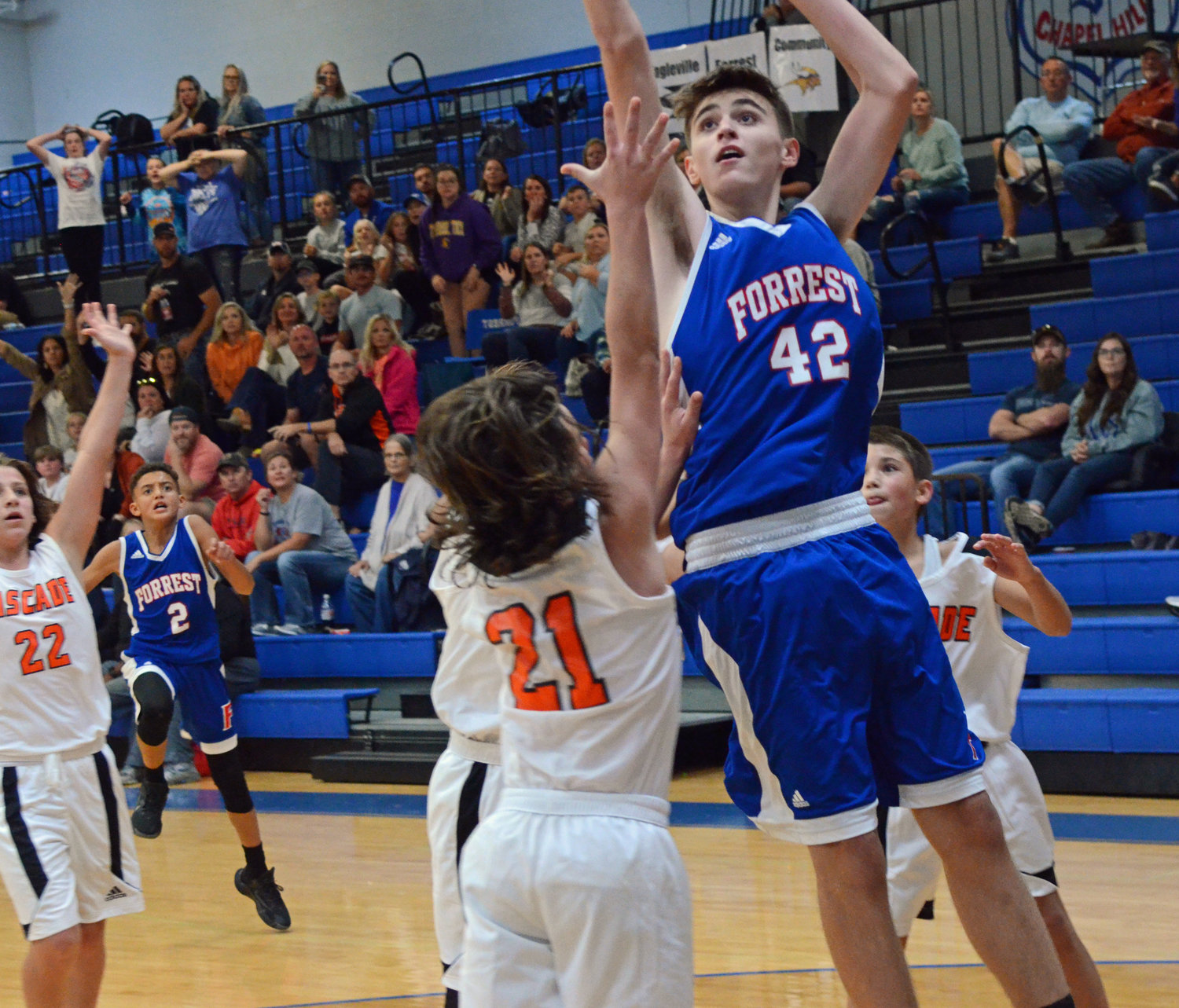 Josh Doud nails the game-winning shot at the buzzer to beat Cascade 36-34 and send the FMS Rockets to the World Tournament championship game versus Eagleville Saturday night at Chapel Hill at 7 p.m.
Tribune photos by Anthony S. Puca 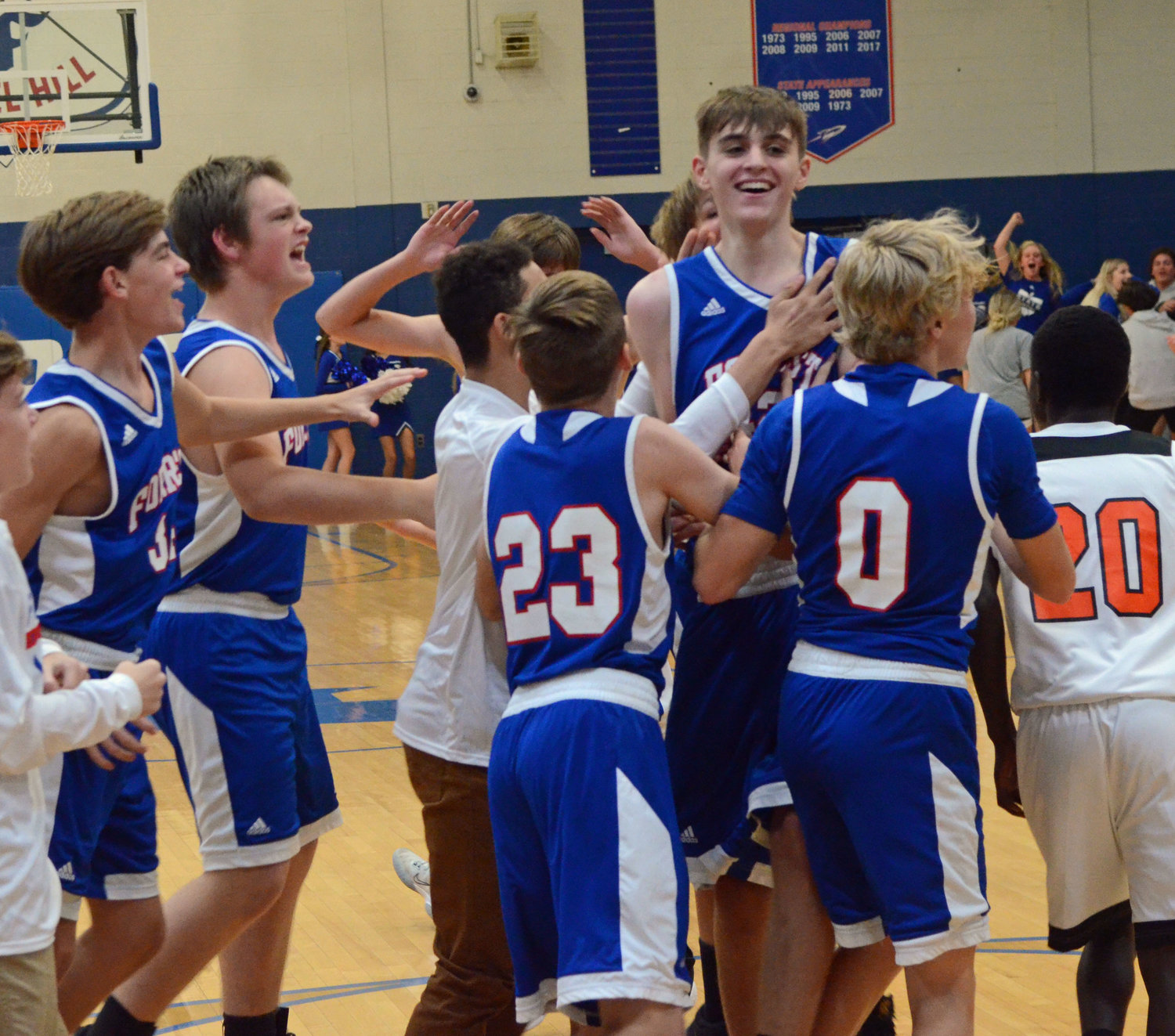 The Rockets mob Josh Doud after the eighth-grader made the game-winning basket. 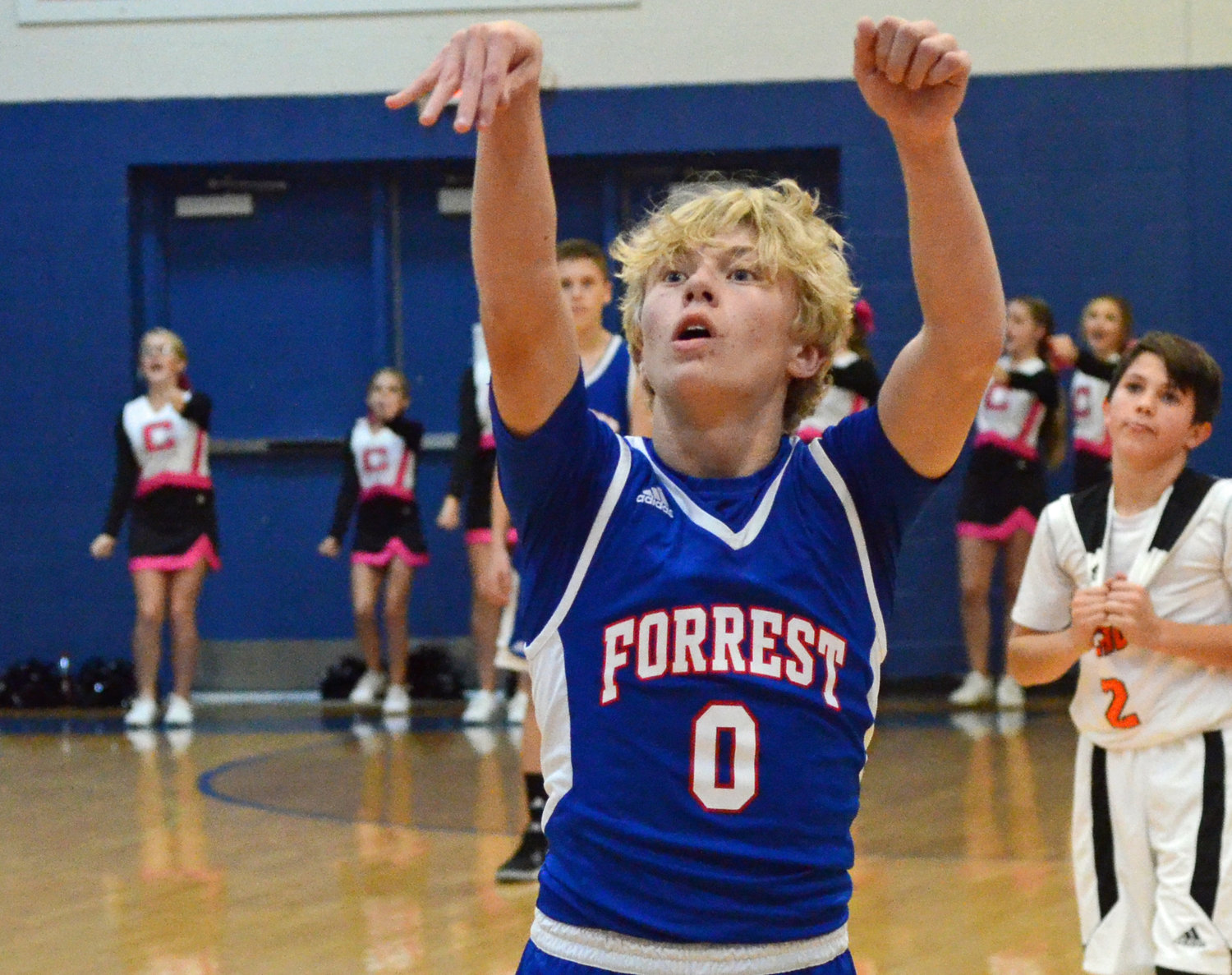 Fletcher Fields, who was all over the gym, had a huge game for the Rockets, scoring a team-high nine points along with Josh Doud. 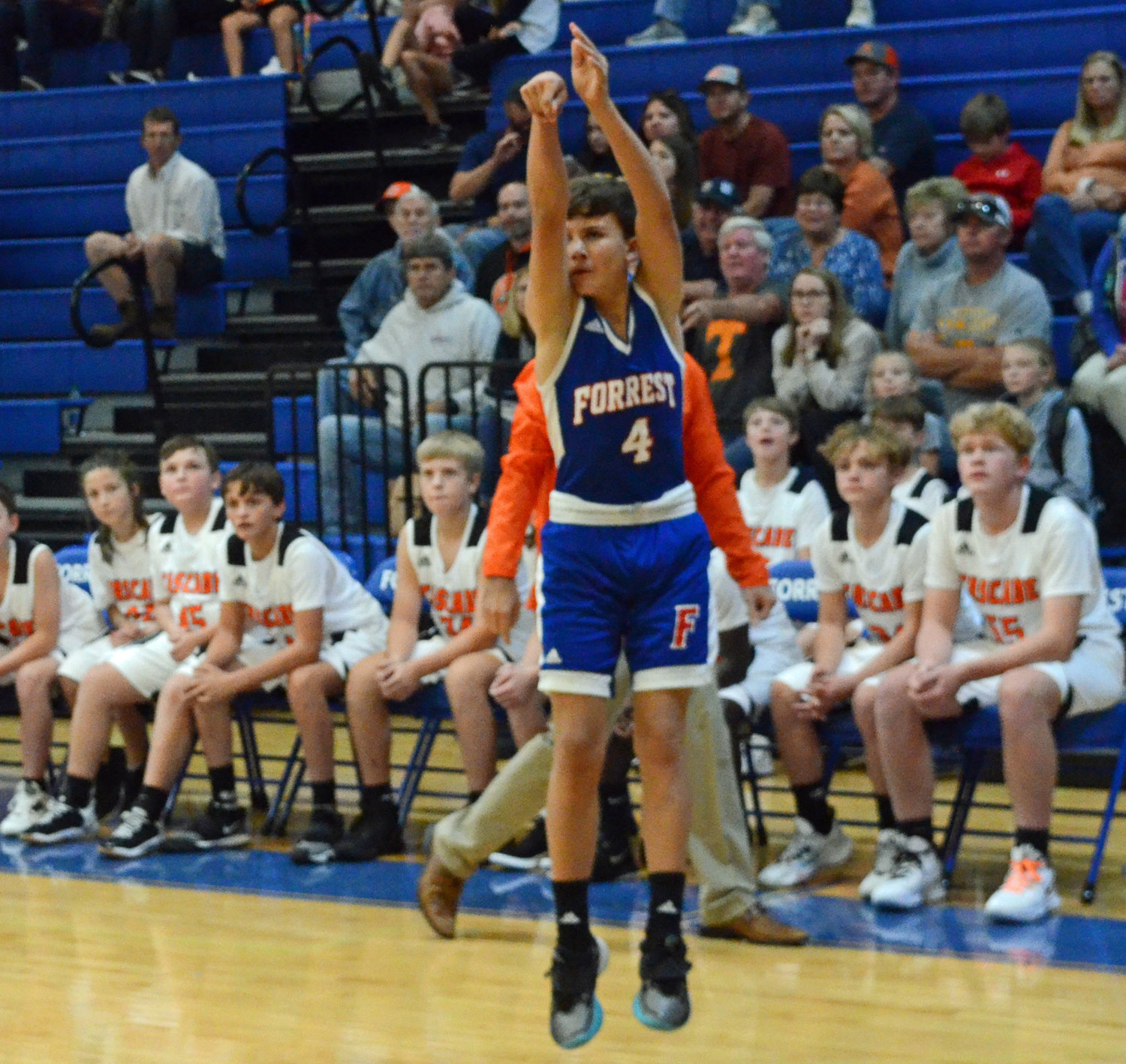 It went down to the wire and it looked like the Champions would send the game to overtime when Braxton Burris nailed two free throws with 4.5 seconds left in the contest, but the Rockets had other ideas as Josh Doud wore the hero’s cape when he knocked down a short jumper off the glass as time expired to seal the 36-34 win for FMS.

The biggest lead either team had was at six points with the Rockets leading 12-6 in the first period and the Champions held the same six-point lead after putting together a third quarter comeback, leading 22-16.

Forrest trailed 6-4 early in the game before Paxton Mealer drilled back-to-back 3-pointers and a steal and score by Eli Bell on the next Cascade possession finished off an 8-0 run that turned into a 12-8 lead at the end of the first period for the Rockets.

Two Trent Willems free throws early in the second quarter gave FMS a five-point lead at 14-9 before the Champions mounted a comeback with 6-0 run to take a one-point lead until Bell scored late to put the Rockets up by one point at 16-15 at the halftime break.

The Wartrace boys came out of the locker room on fire as they reeled off seven straight points to take a 22-16 lead, only to see the Rockets surge right back with a 6-1 run behind four Fletcher Felds points and a Bell basket to cut Cascade’s lead to one point at 23-22, entering the fourth quarter.

Cascade pushed on behind the red-hot Henry Stone, who led all scorers in the game with 19 points.

Forrest trailed by one point at 27-26 with less than four minutes remaining in the game when Stone scored on a drive and then nailed two free throws on a technical foul on the Rockets to give the Champions a 31-26 lead.

Fields came up with a loose ball and scored on a hustle play to make it a 31-28 contest and Stone made one free throw for a 32-28 Cascade lead with 1:40 left in the game.

Doud came up huge from the foul line as he made 3-of-4 to cut the Cascade lead to one point and the Rockets had a chance to go ahead but a couple of missed free throws kept them behind.

After an unsuccessful offensive possession by Cascade, the Rockets scored on an offensive rebound by Doud to put FMS in front 33-32 and one Houston Matlock free throw made it a two-point game with less than 20 seconds left in the contest.

On Cascade’s next possession, a scramble for a loose ball on the floor led to a Forrest foul and Burris stepped up and calmly nailed both charity shots, but the Rockets got the ball in fast and it ended up in Doud’s hands near the goal where he kissed it off the glass for the game-winner as the buzzer sounded.

The FMS bench emptied on the floor to mob Doud as the Chapel Hill faithful were in a joyous mood in the stands, setting up Saturday night’s 58th World Tournament championship game that looks like it could be a third doozy in a row as the Rockets take another longtime rival in Eagleville with tipoff scheduled 7 p.m.