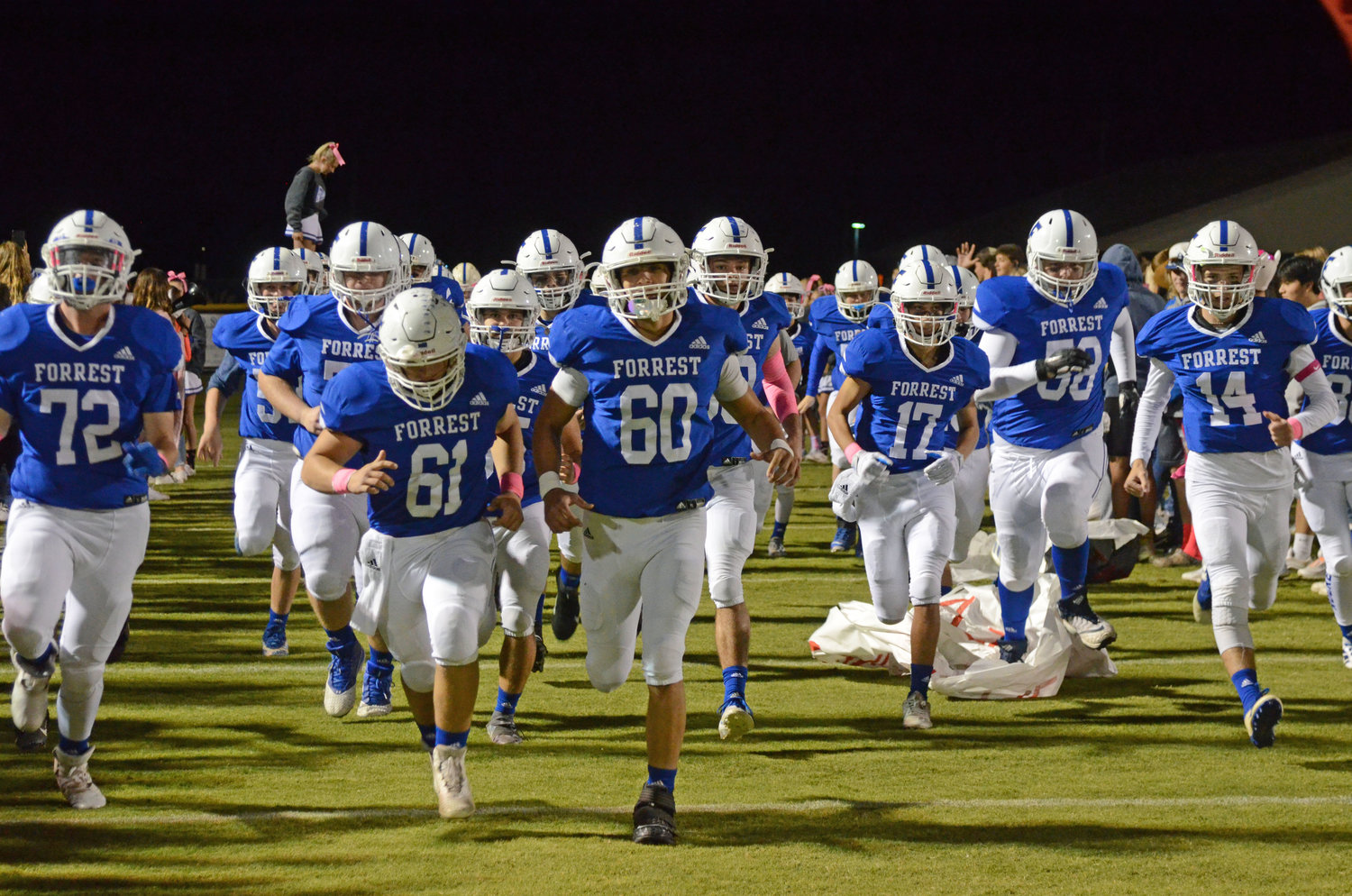 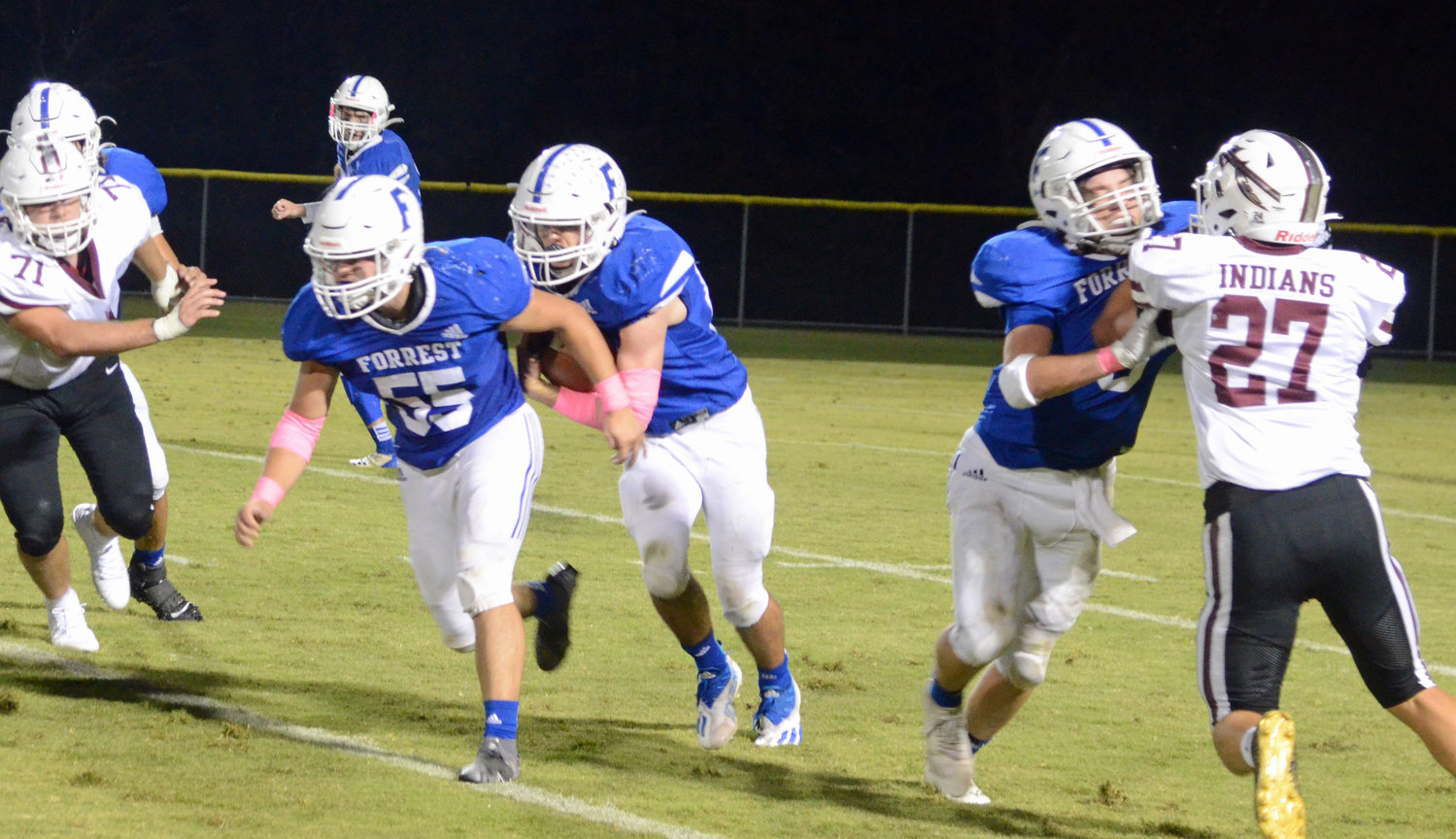 McCalister Wilson follows Braden Jones (55) and Liam Bell (6) for a nice gain in the first half. 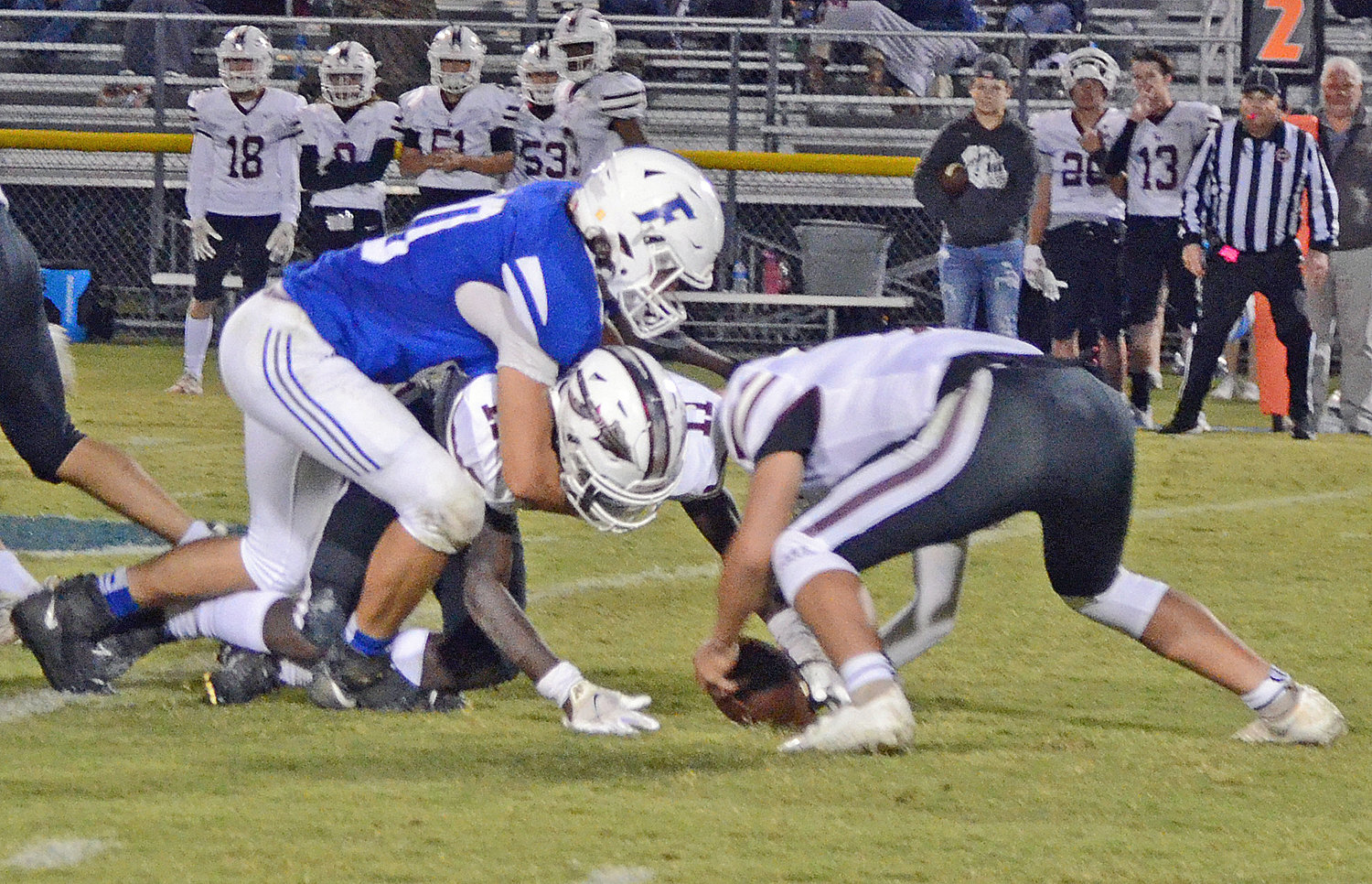 Rockets’ senior Layne Strasser crashes through to cause a fumble in the backfield that was recovered by the Indians. 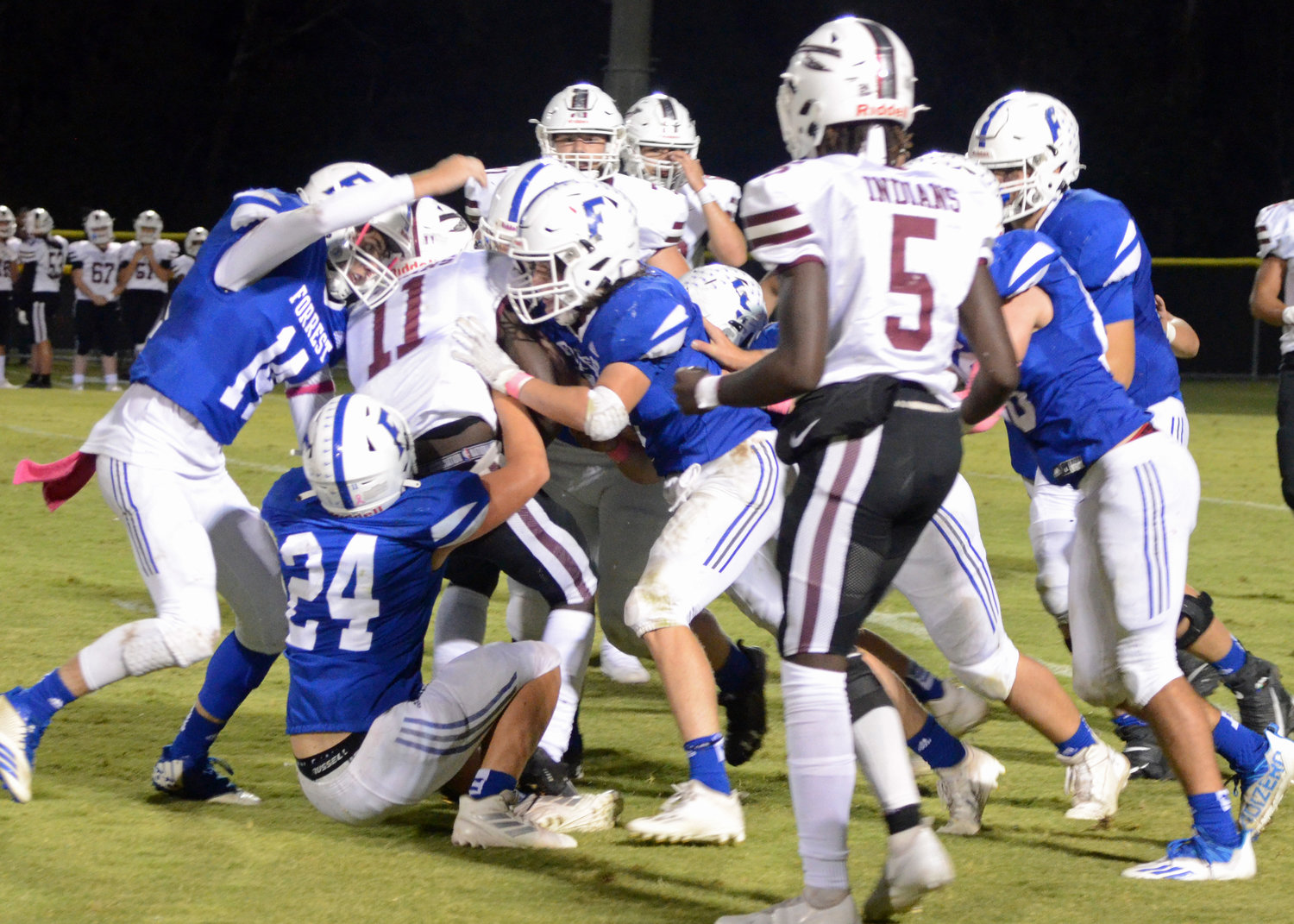 The Forrest defense gang tackles East Robertson running back Isiah Groves in the first half. 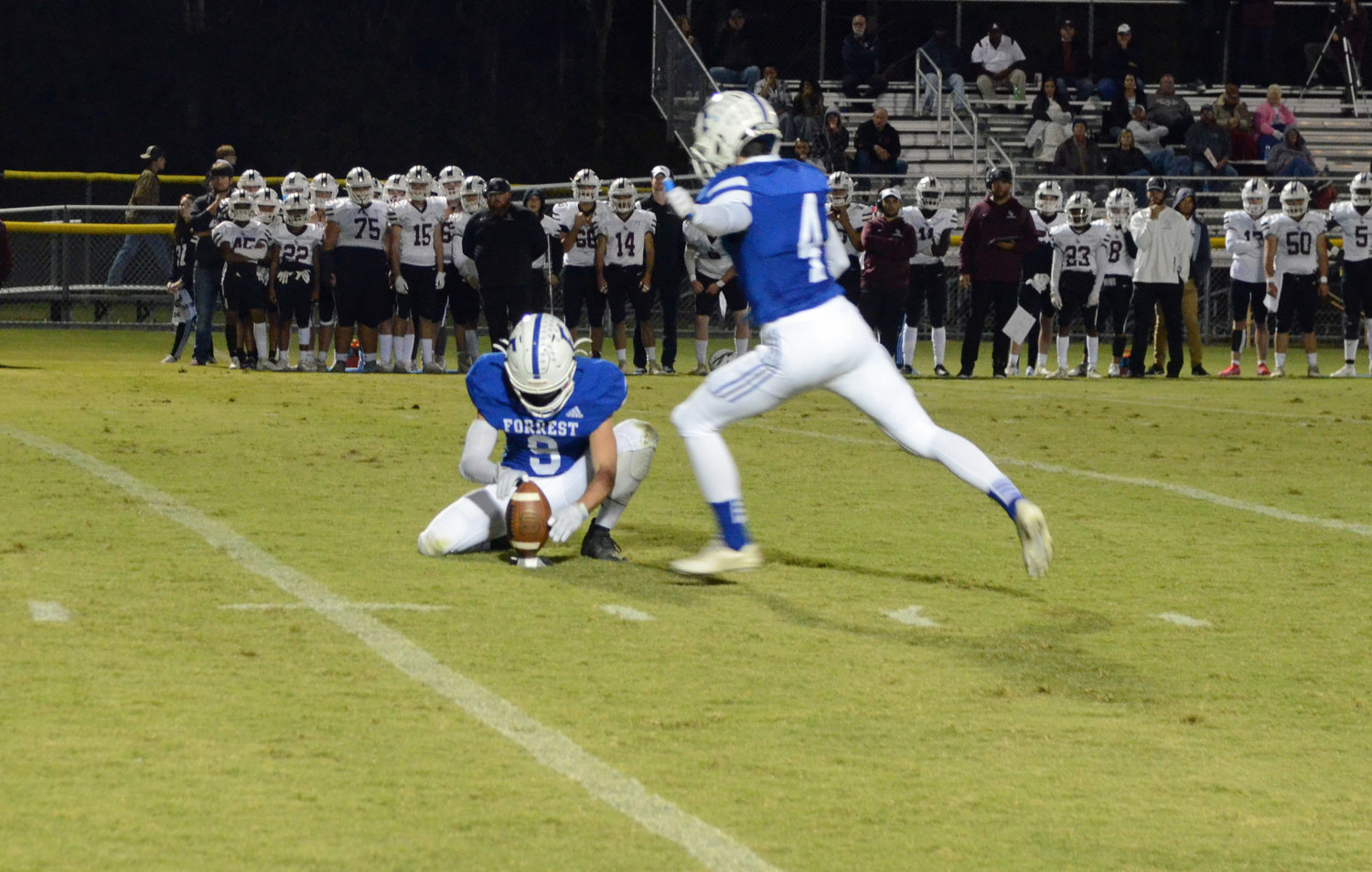 Gavin Grissom drills a 31-yard field goal to give the Rockets a 10-7 halftime lead Friday night at the Murrey E. Holton Memorial Field in Chapel Hill.
Previous Next
Posted Tuesday, October 26, 2021 11:09 am

“That loss is on me, I didn’t have the boys ready to play.””
Forrest coach Eli Stephenson
By Anthony S. Puca Sports Writer

The Forrest Rockets scratched and clawed for eight weeks to secure the Region 5/2A crown last week at Richland before finally returning home after a long three-game road trip and a bye.

On the docket Friday night was a non-region contest versus a talented East Robertson squad that came to the Murrey E. Holton Memorial Field in Chapel Hill with a 3-5 record a five-game losing versus the Rockets, dating back to 2006.

The Eagles did enough to win 21-17 as the Rockets turned in an average performance, gaining just 174 yards on offense while surrendering 296 yards on defense.

“East Robertson came down here ready to play, they had a great game plan and took it to us,” Forrest coach Eli Stephenson said. “That loss is on me, I didn’t have the boys ready to play.”

The Forrest defense did an excellent job containing nationally ranked four-star prospect and Ole Miss commit Taylor Groves to minus nine rushing yards and five catches for 55 yards, but they could not stop Isiah Groves, who toted the rock 22 times for 153 yards and two touchdowns.

The Rockets won the coin toss and elected to receive the opening kickoff and managed to get one first down before having to punt the ball away and the Indians went to work, driving 74 yards in just six plays, capped off by an Isiah Groves 8-yard touchdown run.

The Rockets went three-and-out on their next possession, but the defense stepped up, stopping East Robertson on a fourth down pass.

The defensive battle continued for the remainder of the first quarter as both teams exchanged three-and-outs before Forrest got the ball back with 10:54 remaining in the second quarter.

The Rockets picked up a pair of first downs on a McCalister Wilson 13-yard run and a Tayton Swift first down scamper inside East Robertson territory at the 42-yard line.

Gavin Grissom booted the extra point and the game was tied at 7-7 with 5:44 left in the first half.

The Forrest defense came up huge again, stopping the Indians on downs with 2:50 remaining in the first half and the Rockets drove down the field, coming up with two big plays on a Bennett to Brenton Burchell 17-yard pass and a Swift 11-yard run to the East Robertson 14-yard line.

Stephenson called timeout and sent on Grissom, who drilled a 31-yard field goal to give Chapel Hill a 10-7 halftime lead.

The Indians wasted little time retaking the lead as they took the second half kickoff and marched 71 yards on 10 plays, scoring on an Isiah Groves 33-yard touchdown run.

Hunter Noss booted the second of his three successful extra points in the game and the Indians led 17-14.

Liam Bell returned the ensuing kickoff to the East Robertson 49-yard line and Forrest drove to the 9-yard line where Bell picked up a first down on a fourth-down run and Swift finished it off with a 7-yard touchdown run.

Grissom booted the extra point and the Rockets led 17-14 with 1:02 remaining in the third quarter.

The Forrest defense held again to force a punt, but so did the Indians, who got the ball back at their own 36-yard line with 9:01 remaining in the contest.

East Robertson burned five minutes and fifteen seconds off the clock, driving to the Forrest 1-yard line where Taylor Groves scored to make it a 21-17 contest with 3:26 left in the game.

Facing a fourth-and-11 from their 34-yard line, the Rockets tried to convert through the air, but Cam Cope intercepted the Bennett pass for the lone turnover in the game and the Indians burned the remainder of the time off the clock for the win.

“Our defense has been playing well all season, they got the ball back for us in the fourth quarter, but we didn’t take advantage of that,” Stephenson said. “Our offense, we have to be able to put a drive together there and if we did, we would be sitting here with a different attitude. East Robertson finished and we didn’t.”

“Our kids will be ready to play, they always bounce back from a loss,” Stephenson said. “Mt. Pleasant is just as athletic as East Robertson was here and our kids will work hard this week and bounce back, I’ll make sure of it.”

Rumley ices Eagles for first win of the season

Rockets take it to the limit, fall with seconds to go